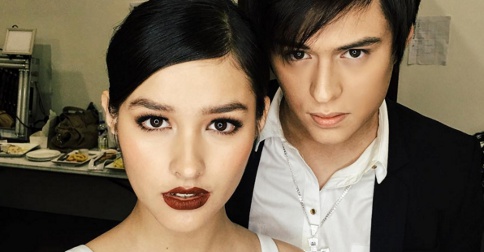 Is he officially courting her now that she's 18?

(SPOT.ph) If you follow the on-screen love team of Enrique Gil and Liza Soberano, then you probably already heard that he has plans to court her when she turns 18. The actress recently celebrated her birthday with a surprise beachside party, so LizQuen fans have been waiting eagerly for an update.

It turns out that they have other priorities...for now. "We're in a place na we're so happy," he said. "I'm happy. [A] label doesn't really mean anything as long as you're happy." Meanwhile, Liza echoed the sentiment, saying she's "just happy with what's going on."

The two are currently busy promoting their new show, Dolce Amore, where Enrique plays Tenten, an orphaned boy who takes on odd jobs to support his family. He eventually encounters Liza's character, Serena, an Italian princess who longs for a normal life.

In a separate interview, co-star and veteran actress Cherie Gil praised Liza for learning how to speak Italian for her role. She also admitted that she initially hadn't heard of Liza prior to the show, saying, "I told her straight away that I had to Google her and told her, 'You look astoundingly beautiful.'"

The show is directed by Cathy Garcia-Molina and also stars Matteo Guidicelli, Edgar Mortiz, Sunshine Cruz, and more. It airs on February 15.