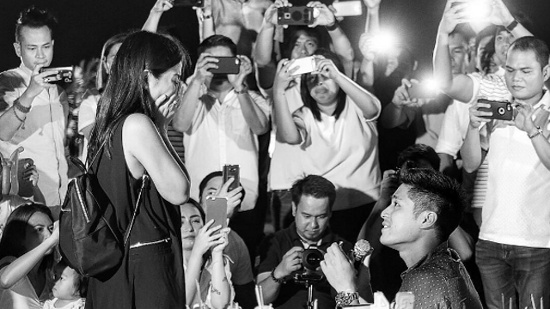 Wedding bells are ringing for this Tabing Ilog alum!

The proposal happened during a surprise birthday party that Castillo threw for her (she turned 34 on Tuesday, May 17). The party was held at the rooftop of Bellevue Hotel in Alabang, and was attended by the couple's closest friends and family.

He was captured on camera getting down on one knee and saying, "We started off as friends tapos naging partner-in-crime kita, best friend, tapos hindi mo talaga napigilan at ginawa mo akong boyfriend. Now I'd like to seal it. Will you marry me?"

A wedding date has yet to be announced.

Celebrity Engagement Kaye Abad Paul Jake Castillo
Your Guide to Thriving in This Strange New World
Staying
In? What to watch, what to eat, and where to shop from home
OR
Heading
Out? What you need to know to stay safe when heading out