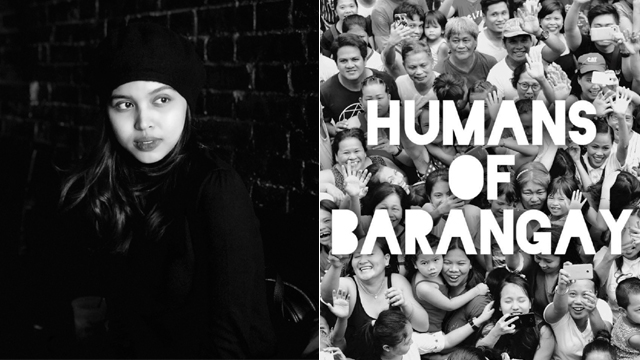 LOOK: Maine Mendoza Starts Her Own Humans of Barangay Campaign

Inspired by the famous Humans of New York.

(SPOT.ph) It wasn't that long ago when the founder of Humans of New York, Brandon Stanton, visited Manila to take photos for and host a talk about his project. He's since been updating Humans of New York's (HONY) Facebook page with stories about Filipino individuals he came across during his trip. Stanton, who has become famous for his work, has been traveling to different countries to photograph people from all walks of life, try to learn more about their lives, and share their stories to the world.

This is the kind of work that TV host and actress Maine Mendoza aims to do with her HONY-inspired project—Humans of Barangay.

In a statement she released on April 2, Mendoza shares that she wants to use her platform as a way to give voice to the people that she meets and works with every day.

She set up a Facebook page for Humans of Barangay, which has 30,000 likes as of writing. For the first day of her page, she shared four posts. Three of the posts were of her colleagues Wally Bayola, Paolo Ballesteros, and Jose Manalo. Bayola talks about the difficulty of being taken seriously as a comedian, Ballesteros gives advice about being open with one's sexuality, and Manalo emphasizes on the importance of discernment.

The fourth post was of two friends who talk about their childhood and the struggles that comes with being comfortable with their sexuality.

Mendoza has since posted a couple more photos of other individuals she's come across, like an ice cream vendor sharing about coming home to his dog after a long day's work and a nun-to-be-turned-teacher-turned-protection-agent.

It's only been the first few days of her new project, but it already looks like Mendoza has more interesting stories up her sleeve. Isn't it refreshing to see a celebrity use her platform to tell a story other than her own?