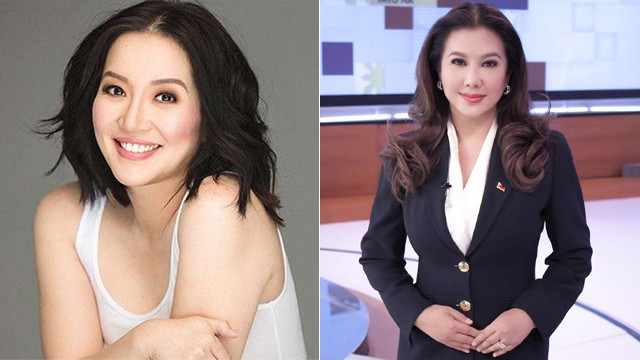 Are we supposed to pick a team now?

(SPOT.ph) It's been quite the weekend for Queen of All Media, Kris Aquino. What was supposed to be a happy birthday weekend for her son Bimby has been a wild roller-coaster with Kris getting triggered by ex-husband James Yap's birthday greeting. "Happy birthday Bimb! I miss you and think about you everyday. Alam ko na ang tagal na natin 'di nakapag-spend ng time together, at di nagkikita, but I want you to know that I'm always here for you. I will always be your papa. I hope you enjoy your birthday."

Not one to hold back her comments especially when it comes to her sons, Kris retorted with a scathing reply that recounts all of the times that James did not defend Bimby. "When Bimb saw the post na BINASTOS siya na 'baklain' siya, he shrugged it off and said: 'Mom, who cares? My own biological dad said that about me in court and he's said it so many other times?' Nanahimik pa rin ako about that kasi feeling ko- wag mo kaming guluhin, peaceful tayo...E humirit ka with your birthday post."

Kris later issued a statement (along with a blacked-out video post with Whitney Houston's "Try It on My Own" playing in the background), apologizing for including politics in her post. But she clarified that she will not be deleting it. "I apologize for including politics, but that is the unfortunate baggage and responsibility of my last name. But I will not delete any posts because my anger comes from the heart of a mother who has been unnecessarily stepped on by someone who hasn’t had the privilege of motherhood... I do sincerely apologize to my brother. And I apologize to President Duterte. And Mar, to you I am sorry. In the same way I would always wonder why I would be dragged into issues not of my doing—I was guilty of that tonight. I’ll be back after I have found my peace. Until then, to all those who still found it in their hearts to understand and embrace me and my sons—you have my eternal gratitude."

Of course, social media users had something to say about the whole ordeal since it started. Some applauded how she called out James while also being able to advertise products she endorses.

What Kris Aquino did is fine. She may have said that, but what triggered it? An ungrateful and shameless Korina Sanchez, not by matter of principles or politics, it was conjured up by pure anger and disappointment at someone she had considered at one point in her life a “friend”.

Not really much of a kris aquino fan but this woman is a straight up SAVAGE. PALABAN NA KUNG PALABAN ???????????? pic.twitter.com/ebohVSir6h

There’s always been a kris aquino inside of me pic.twitter.com/ipmBLv70DC

But not everyone was impressed with what she did. While she apologized for involving politics, they still called her out for it. They also express their failure to understand how something seemingly simple has caused this big of an issue.

She apologized to her relatives and Mar's relatives for her (sort of?) endorsement of Duterte.

Not to victims of EJKs. Not to workers of Boracay who lost jobs. Not to women disgusted by the misogynistic president. (We can add more to this list.)

That's Kris Aquino for you.

I don’t understand how a simple birthday greeting could make Kris Aquino extremely angry. Ito ang mahirap pag sobra sa talino ang tao — they interpret things many different ways, and overcomplicate them. Not everything is about money or power. So much vanity and entitlement. ????

Still, some made light of the whole issue.

Sorry Avengers: Infinity War but Kris Aquino vs. Korina Sanchez is the war of the century.

Presidential spokesperson Harry Roque reportedly reacted to the issue, saying, "Welcome on board, Ms. Kris Aquino." Meanwhile, James Yap, Korina Sanchez, Mar Roxas, and President Duterte have yet to issue statements and reactions regarding Kris' posts. But for now, we're sure there's still a lot more the Internet has to say.