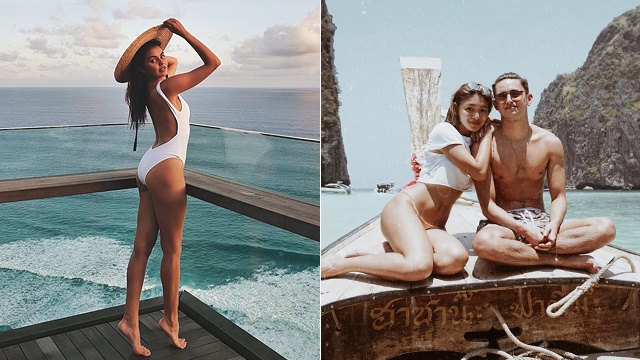 10 Local Celebrity Travel Photos That Will Fuel Your Wanderlust

Check out some of their best photos!

(SPOT.ph) We’re well in the middle of summer and that means everyone’s been itching to get out of the house and explore some place new. You’ve probably already been on a few trips of your own—with many more plans on the back-burner for now—and so have your fave local celebrities. We round up 10 Pinoy celebs who have made the most out of their summer and posted great photos for everyone to enjoy. (Who knows, maybe you can even use their photos as inspiration for your own!)

If you ever need some cool-toned inspiration for your feed, you know that all you have to do is go to Kim Jones’ Instagram. She doesn’t post a lot of her vacay pics (it seems that she’s been busy creating her own jewelry collection), but they’re always worth the wait. This summer, it looks like she brought her fashion-forward self to the pastel-pretty streets of Hong Kong. She also took her new jewelry line out for a stroll on the beaches of Amanpulo.

Nadine Lustre has been a busy bee lately—what with a movie that recently premiered and a concert tour around the Philippines and around the world with James Reid. But that doesn’t mean she doesn’t have time to enjoy all the places she goes to. This summer, she enjoyed the beach life in Phuket, where she rode boats around the famous limestones of the Phi Phi Islands. She also toured around the temples of Bangkok while she was in Thailand. When she went to Dubai, she made sure to hitch a camel ride (or at least, pose by a camel) on her way across the dessert.

It’s no surprise that Maxene Magalona is really a beach babe at heart—she even got married on the shores of Boracay! And a destination wedding can only mean a trip to an equally wonderful destination. Maxene and new hubby Rob Mananquil also toured Tokyo during cherry-blossom peak season. Their swoonworthy photos will make you want to book a flight, stat!

KC Concepcion is no stranger to Europe—how could she be when she spent a good part of her adult life studying in Paris? But it’s safe to say she enjoyed her time there as she headed to visit Berlin. But before her Eurotrip, she first caught some sun at El Nido in Palawan. Based on her photos, she even hiked on a trail and enjoyed the quiet beaches and fun boat rides with her friends.

If you’re thinking that KC’s photos of her Berlin trip look great, that’s because she has none other than Lovi Poe as her Insta-photographer. Lovi strolled around Berlin in great outfits by day and partied her way around the city by night. You can’t have great alcohol without great parties! Before heading to Europe, Lovi also went on a trip around North America—particularly in New York, where she posed under the bright lights of the City That Never Sleeps, and in Ontario, Canada, where she posed by the gushing waters of the Niagara Falls.

When you’re the most beautiful woman in the world—the universe, rather, it only makes sense that you’d travel all around the globe. And that’s exactly what Pia Wurtzbach has been doing this summer. She’s gone from posing by the Burj Al Arab in Dubai, to the Ruins of St. Paul in Macau, to beachside spots in Baler, to the familiar streets of Tokyo. We’re pretty sure there were many more trips in between. Talk about being a globetrotter!

Pia isn’t the only one making quick trips from cold to hot AF climates—just look at Janine Gutierrez! It looks like she had a great time eating plates of sushi and posing with Mickey Mouse in Tokyo. She was busy catching trains in the busy city but she also caught the cherry blossoms in full bloom! From the chilly weather, it was straight to the sunny rays of Bali for Janine, where she visited seaside temples and lounged by the beach.

You can only expect Heart Evangelista’s travel photos to be as fab as her outfits, and that’s exactly what you’ll see from her trip to Italy. Before the mom-to-be announced her pregnancy with Chiz Escudero, Heart took to the streets of Milan, Rome, as well as parts of Lombardy and Tuscany—in towering heels, no less! Aside from devouring plate after plate of pasta and pizza and traveling around the lakes by boat, she also went shopping for the glazed pottery that Italy is famous for.

Anne Curtis impressed everyone when she crossed the finish line of the London Marathon—which is 42 kilometers long, no big deal—during the last week of April. (Plus, she did it to raise money for the kids of Marawi.) That’s earned her more than her fair share of vacay time in anyone’s book but it seems she’s got another project in the works. The good news is, it’s being shot on the beaches of Aurora, which means she gets to enjoy the sun and the sand before shooting some scenes.

There’s a lot you can do to make the most out of your summer: You can go swimming, kayaking, and surfing. There’s also skydiving, which is Glaiza de Castro’s choice of adventure this summer. She’s been going around Bondi Beach and exploring the famous landmarks of Melbourne and Sydney in Australia. But one thing she wanted to check off her bucket list is jump out of a plane at 15,000 feet—and she did!

Travel Lovi Poe Nadine Lustre Pia Wurtzbach Janine Gutierrez Kim Jones Pinoy Celebrities Local Celebrities Maxene Magalona Heart Evangelista Glaiza De Castro Anne Curtis Kc Concepcion
Your Guide to Thriving in This Strange New World
Staying
In? What to watch, what to eat, and where to shop from home
OR
Heading
Out? What you need to know to stay safe when heading out