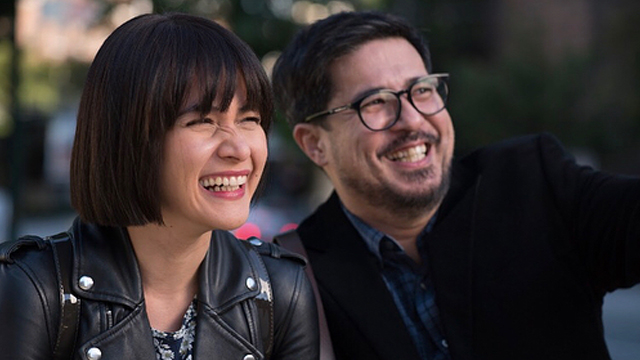 This is after their controversial remarks about Senator Antonio Trillanes IV on an episode of Gandang Gabi Vice.

(SPOT.ph) Fans of Aga Muhlach and Bea Alonzo were understandably excited when it was announced that the two actors would be starring together in a film called First Love, directed by Paul Soriano. The movie, which premiered on October 17, had people lining up in theaters. But just a couple of days after its release date, some have called to boycott the film because of Muhlach and Alonzo's comments about Senator Antonio Trillanes IV on Vice Ganda's talk show, Gandang Gabi Vice.

The two appeared on the show on October 14 in an effort to promote the film. Muhlach and Alonzo participated in a segment called Tanong Mo Mukha Mo, where a well-known personality's photo is flashed on screen and the guests have to ask them something they want to know. When a photo of Trillanes is shown, Muhlach first shakes his head, seemingly in disapproval. Trillanes' amnesty—granted to him by then-President Noynoy Aquino—was revoked by President Rodrigo Duterte on September 4. A warrant for his arrest was issued, but Trillanes sought refuge at the senate house, where Senate President Vicente "Tito" Sotto said the military could not arrest him.

Disclaimer: video is a property of abscbn, no intention of infringing their copyright. pic.twitter.com/aLteURNGqh

The segment was reportedly cut from the aired version of the show and taken down from ABS-CBN's website. But social media users were able to find the clip and posted it online along with their reactions to Muhlach and Alonzo's comments.


not hypocritical. it's being complicit and being enablers.


Oh my god ang bobo nila. Bea and Aga are trying to pander to the wrong audience. The DDS is not the crowd that's likely to go romance/romcom movies. They're looking at the wrong direction.

And Aga is a has-been naman na sooo https://t.co/uileRj9g9U


Was about to bring my mom to watch this Bea Alonzo and Aga Muhlach movie this weekend. But after learning about this eh wag na lang. Kain na lang kami sa labas. I will also turn down my BFF's invite na samahan siya to watch also this movie. Magoging busy ako. https://t.co/1XG2ZKGgzw


Some talked about how freedom of speech is important in a democracy, while others said that they will not be supporting Muhlach and Alonzo's film. Muhlach has previously voiced his support for President Rodrigo Duterte on his Instagram account. Duterte also visited the wake of his father in March. During the 2016 elections, Alonzo also tweeted about supporting Duterte in his bid for the presidency. There has been no comment from Muhlach, Alonzo, and Vice Ganda about the edited segment as of writing.