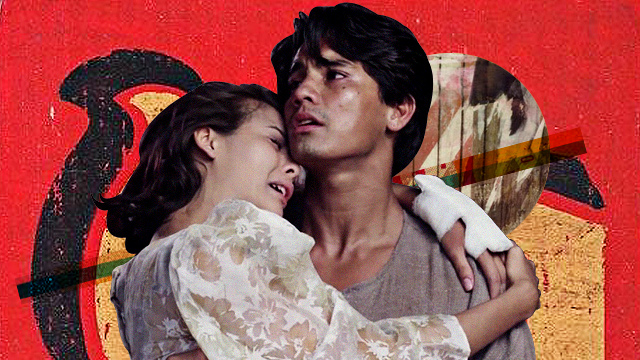 Decades later, they still give us all the feels.

(SPOT.ph) Oh, to be a showbiz love team in the '90s. It meant that a signature teleserye, theme song, or movie was not enough to prove you’ve made it. If the couple did not appear on at least one notebook cover, sing a sappy duet in a noontime show, or admit to a blossoming friendship on a Sunday afternoon talk show, they weren’t truly a love team of the decade.

These love teams tick off most, if not all aforementioned qualifications. As a result, they have also proven that even during the era of pagers and dial-up, a couple need not a portmanteau or hashtag to prove their recall or assert their impact. We surely remember all of them today.

Since we can't possibly pick favorites, here are the most unforgettable love teams from the '90s:

'90s Reel: Forever, Dahil Ba Sa Kanya?
When Mikee Cojuangco, equestrienne and society princess, and Aga Muhlach, perennial heartthrob and movie prince, filmed Forever, not only did they score high at the box-office; they also developed a special friendship that sent showbiz and society reporters into a tizzy. Alas, they only dated for a while but the idea of a prince and princess from two disparate kingdoms coming together resonated with fans, became a country-club conversation starter, and was talk-show fodder for a quite a while.

'90s Reel: Hihintayin Kita sa Langit, Iisa Pa Lamang, Saan Ka Man Naroroon, Akin Ang Pangarap Mo
No other '90s love team arguably fit the hot showbiz couple mold more than Richard Gomez and Dawn Zulueta. What started as just plain work on the set of 1991 film Hihintayin Kita sa Langit resulted in a couple dozen awards for the movie and real-life romance for its leads. Their streak lasted a couple more movies but their relationship would fizzle out eventually. The two, still as good-looking but even better at their craft years later, have not lost their onscreen chemistry—and their joint appearances in the original Encantadia, the teleserye Walang Hanggan, and the movie She’s Dating The Gangster are proof.

‘90s Reel: Bakit Labis Kitang Mahal, Sana Maulit Muli
In between frontline duties in Miss Saigon and Les Miserables, musical superstar Lea Salonga found the opportunity to shoot two romantic dramas opposite Aga Muhlach, with whom she shares palpable chemistry even to this day. The two, still good friends along with each other’s spouse, have forged a partnership that most would envy. Muhlach, who considers Salonga his TOTGA, famously wrote in 2013, "I have her as a friend now, and so I will always have her." Salonga, for her part, would choose only Muhlach to be her onscreen partner if she decides make movies again.

'90s Reel: Muling Umawit Ang Puso, Pangako ng Kahapon, Campus Girls, Habang May Buhay, Dahil Tanging Ikaw
Time was when a pubescent Donna Cruz metamorphosed into one of the decade’s most promising singer-actresses and Ian de Leon grew up and away from his legendary parents’ (Nora Aunor and Christopher de Leon, no less) respective shadows to become one of Viva Film’s most bankable big-screen love teams. Though not an exclusive tandem (Cruz was also paired with Keempee de Leon in the TV show Villa Quintana), De Leon and Cruz perfectly encapsulated and immortalized the joy and pains of young love with their string of box-office hits.

'90s Reel: Mara Clara, Mara Clara: The Movie, Paano Ang Puso Ko, Muling Ibalik Ang Tamis ng Pag-Ibig, Kasal-Kasalan, Wow...Multo, Dito Sa Puso Ko
It was certainly kismet when post-Ula: Batang Gubat and pre-Drama Princess Judy Ann Santos and Universal Motion Dancer Wowie De Guzman teamed up as teleserye Mara Clara’s resident love birds for most of the show’s five years. What eventually ensued was a real-life young romance, a follow-up teleserye, and several box-office hits. But it was in Santos’ stars to move on to other things and work with other actors at the turn of the millennium, including Piolo Pascual with whom she shot well-received teleseryes and movies for a good portion of the next decade.

'90s Reel: T.G.I.S., Growing Up, Ikaw Na Sana, T.G.I.S.: The Movie, Wala Na Bang Pag-Ibig?, Laging Naroon Ka
The smash combination of Bobby Andrews and Angelu de Leon—her pairing with Onemig Bondoc didn’t elicit the same effect—was the love team that awoke television from its Saturday afternoon slumber in the mid-'90s. As Wacks and Peachy (or Cookie and Pancakes, if you were a true fan) from the seminal youth-oriented show T.G.I.S. and later on, as the lead stars of their own blockbuster movies, they led that decade’s pack of young love teams that hordes of teenagers spent their weekends and allowances on.

'90s Reel: Mara Clara, Gimik, Paano Ang Puso Ko, Kay Tagal Kitang Hinintay, Gimik: The Reunion
Previously road-tested as an alternate love team in the original Mara Clara, Judy Ann Santos and Rico Yan continued their tandem as the lead stars of Gimik, ABS-CBN’s answer to the rival network’s T.G.I.S. While their turn as young, upper middle class star-crossed lovers on TV was a hit with the Saturday afternoon crowd, it was when Yan and Santos played up their real-life differences—she with her mass appeal and he with his affluent leanings—onscreen that fans found the fairytale they were looking for.

'90s Reel: Gimik, Tabing Ilog, Nagbibinata, Mahal Na Kung Mahal
Of the four love teams in the Sunday teen show Tabing Ilog, it was John Lloyd Cruz’s Rovic and Kaye Abad’s Eds that showed the most acting chops and crossover potential. The pairing extended to the silver screen, where they were cast in a couple of coming-of-age romantic comedies that still get airtime on cable TV today. Unfortunately, Tabing Ilog and the love team had to give way to Cruz’s turn as Yuri in Kay Tagal Kang Hinintay in 2003 where he was first paired with Rica Peralejo and eventually to a gawkish but promising Bea Alonzo. Abad would then become a character actress—and to good reviews.

'90s Reel: Gimik, Flames: The Movie, Gimik: The Reunion, Labs Kita, Okay Ka Lang?, Kung Ayaw Mo Huwag Mo, Hey Babe!
The showbiz scribes of the time prophesied that Marvin Agustin and Jolina Magdangal, with their flair for comedy and ability in drama, were the modern William Martinez and Maricel Soriano—but they were, in fact, their own kind of love team. Agustin, with his funny, boy-next-door appeal, and Magdangal, with her range and reputation as a trendsetter, easily charmed audiences and left a dent in pop culture from as early as TV teen show Gimik to their handful of movie hits, including one they shot with Martinez and Soriano and another where the ultimate hugot movie line of all was uttered.

'90s Reel: Mula Sa Puso, Saan Ka Man Naroroon, Madrasta, Flames: The Movie, Dahil Mahal na Mahal Kita
It was a reel and real tandem that was great while it lasted, starting towards the late '90s when Claudine Barretto was being groomed by ABS-CBN for superstardom and Rico Yan, the torchbearer of Star Circle Batch 1, was being built up as the next matinee idol. The two found their sweet spot via the teleserye Mula Sa Puso and hit it big on-screen with Dahil Mahal Na Mahal Kita, just as everything was coming up roses in their personal lives as boyfriend and girlfriend. The 2002 hit rom-com Got 2 Believe would turn out to be their last project together as well as Yan’s swan song who tragically died a month later. We wish they had more time making magic together.