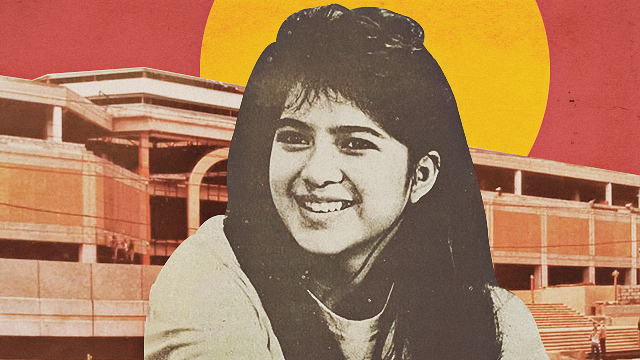 Alice Dixson + That Robinsons Galleria Snake: How the Urban Legend Came to Life

It looks like we're finally getting answers-three whole decades later.

(SPOT.ph) We've had a lot of crazy urban legends plague Metro Manila citizens in recent history. Think stories of the white lady of Balete Drive, a madman infecting moviegoers with AIDS, and, of course, the half-human, half-snake creature that supposedly stalked the ladies' dressing room at the department store in Robinsons Galleria. The most famous victim of that last creature was supposedly none other than '90s It girl Alice Dixson herself—and now finally, after three whole decades of ridiculous tall tales and conspiracies, Dixson is telling her side of the story.

The model and actress posted this insane teaser on her Instagram page with the promise to finally address the rumors that have followed her throughout most of her—and even our—adult lives. Did anyone else have a parent that banned you from trying out clothes in any mall dressing room for fear of a snake-human hybrid?

"Hindi ko gustong buhayin ang chismis; that is the farthest from my intention. Nais ko lang linawin ang mga naganap sa Robinsons Galleria [noong] dalaga pa ako," wrote Dixson in what we take as pure seriousness. An upcoming vlog on her YouTube channel will tackle what really happened to set off the wild chain of events that had entire generations believing a snake monster terrorized fitting rooms.

But before Dixson finally lays down her story, we take a look at its origins. The tale of the fantastical and horrifying snake creature peaked in the 1990s. It was said that the Gokongwei family built their flagship mall, the Robinsons Galleria, for the express purpose of using it as hunting ground of a mutant snake-like offspring—allegedly the twin of Robina Gokongwei-Pe, eldest of the Gokongwei kids.

The snake creature is supposed to have plucked children from comfort rooms. If the snake also saw a pretty lady it fancied enter a dressing room, the floors would supposedly open up and the said person would fall straight into its mouth. Pretty scary stuff, TBH. Dixson was allegedly one of the victims of this snake creature, but somehow managed to escape and was said to have been paid off handsomely by the family to keep quiet.

In an old interview with SPOT.ph, Gokongwei-Pe laughed off the rumours regarding her snake twin, jokingly saying, "Ahas? Naging handbag at sapatos na sa Robinsons!"

At a speech she gave in 2008 at the University of the Philippines’ School of Economics, she recounted how the tale came about: "You were not born yet when the story of my kakambal na ahas who was half-woman, half-snake came out when we opened our second Robinsons Department Store branch in Cebu in 1985. My kakambal was supposed to be the source of our wealth as she laid golden eggs."

Whether the snake creature actually exists or not doesn't really matter at this point; the tale has already been cemented as part of Metro Manila pop culture. We're not entirely sure what huge bombs Dixson may be dropping in her vlog—maybe there was an actual snake that found its way from the grassfields of the Ortigas of the past into the dressing room, maybe she saw a kid in a snake costume, maybe it's a marketing ploy, who knows? One thing we're sure of is that this story isn't about to end anytime soon, and we're here for it.

Adventurer Savvy History Alice Dixson Robinsons Galleria
Your Guide to Thriving in This Strange New World
Staying
In? What to watch, what to eat, and where to shop from home
OR
Heading
Out? What you need to know to stay safe when heading out