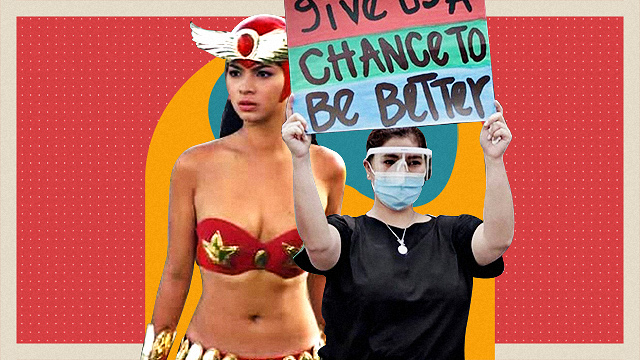 Corporate needs you to find the difference between Darna and Angel Locsin.

(SPOT.ph) Angel Locsin may have taken on the role of Darna way back in 2005 but it is clear that she never stopped being a hero. For nearly two decades now, the actor has turned her attention to philanthropy. She has been recognized for her humanitarian acts by many bodies, The Philippine Red Cross and Forbes Asia included, and her show ‘Iba Yan is dedicated to spotlighting stories of hope. Plus, that IDGAF attitude she has towards anyone who tries to push back definitely has to be some kind of superpower.

We round up a few times she was the living embodiment of Darna, from the times she led charitable movements, spoke up on national issues, or just had the best answer to a basher. Special mention goes to that Four Sisters and A Wedding moment, though it doesn’t really count.

Darna lives among us and her name is Angel Locsin; these are the moments she channeled the character:

A Community Pantry for Her Birthday

More than a year into lockdown and with millions of people without jobs, community pantries began popping up in April 2020 after a small one opened along Maginhawa Street in Quezon City. Locsin joined the effort via a massive grocery-like version in Quezon City to celebrate her birthday. Unfortunately, Locsin and her team weren’t prepared for the many in need who would come and things got unruly; a senior citizen in line named Rolando dela Cruz passed out and later died. Locsin issued a public apology to the family of the deceased. "Ang nangyari po ay akin pong pagkakamali. Sana po’y wag madamay ang ibang community pantries na maganda po ang nangyari," she said on social media. A fast lane and tent for senior citizens was eventually put up; Locsin also said that she will prioritize helping dela Cruz's family.

Locsin tapped fellow stars to start a celebrity auction online in 2019. This was to help fund COVID-19 testing for those in need. Around 44 celebrities came together to sell personal items through an online platform. And by March 2021, Locsin announced that they had decided to give the remaining proceeds—amounting to P6 million pesos—to several local government units and one organization “that now have solid COVID-19 vaccination initiatives.”

Charity Drives for Victims of Rolly and Ulysses

Just as 2020 was finally coming to a close, the year had a few more devastating surprises left for the country in the form of typhoons Rolly and Ulysses. Locsin once again used her platform to call for help—especially to far-flung areas that were badly affected by the two consecutive storms. She was also spotted personally helping out with the Philippine Red Cross efforts.

When She Shed Light on the Rise of Gender-Based Violence

Physical abuse was on the rise during the quarantine as more victims were essentially trapped in the same houses as their abusers. Locsin stated in an IG post that police recorded 682 cases in the first 35 days of lockdown alone, and those were just the reported ones. She posted this black-and-white picture along with information on the Lunas Collective, an online chat service where victims can go for help—whether they just want someone to talk to or are prepared take action—that was founded by Sabrina Gacad, assistant professor at the Department of Women and Development Studies in the University of the Philippines’ College of Social Work and Community Development.

When She Spoke Up Against Red-Tagging

Remember in October 2020 when Antonio Parlade Jr. name-dropped Liza Soberano and Angel Locsin’s relative, former Bayan Muna representative and human rights lawyer Neri Colmenares in a public Facebook post about the NPA? Yup, that was before community pantries. Well, Locsin then dropped the fiercest pic in bright red along with a clear message about the dangers of red-tagging. "Kung magkaiba tayo, hindi ibig sabihin pwede mo na ako i-red tag. Hindi tayo magkakalaban dito. Hindi rin ako 'red'. Magkaiba lang tayo ng paniniwala," she wrote, adding that "The statement made is utterly false and places ordinary citizens like us, those who they swore to protect, in danger," wrote Locsin.

Her Speech During An ABS-CBN Noise Barrage

Locsin didn’t hold back when the franchise of ABS-CBN, her home network, was at stake. She was seen in front of ABS-CBN headquarters along with many others whose livelihoods were hanging by a thread in July 2020. At one point, an impassioned Locsin called on her fellow actors to speak up on the issue saying, “Ano, magpapa-cute na lang kayo sa Instagram?” Her fiery speech must have worked because more talents spoke up in the following days.

When She Shed Light on the Blood Donor Shortage

A few months into the quarantine, when all attention was understandably shifted to the COVID-19 fight, a shortage hit the supply of blood in hospitals and banks. Locsin then went to the Philippine Red Cross in April 2020 with her partner Neil Arce to donate blood—and asked for others to do the same. Many donors were of course postponing their scheduled donations, “but the need for blood never rests and the supply is rapidly dropping,” she wrote on Instagram.

When She Became an “Accidental” Body Positivity Champion

When pictures of Locsin just going about her life—and even adorably enjoying the sun on her face—began circulating online in June 2020, a few folks were quick to lay judgement on her weight. Thankfully, the nasty comments were drowned out by all the people who shared messages of body positivity and self-love. Others pointed to all the acts Locsin has been doing to aid the fight against the pandemic. Bottomline: Angel Locsin has nothing left to prove. We all know she’s awesome—and so does she.

Locsin was also a leading force in taking care of our medical frontliners during the first few months of quarantine, when hospitals were doing their best to organize against the pandemic. She and her team started the #UniTentWeStandPH—plus points for the witty name—where they gathered tents, beds, even air-conditioning units, plus whatever else hospitals were lacking. Her updates on Instagram showed that several other actors even donated their own cot beds for frontliners to use for breaks. By April 24, 2020, the effort was able to raise more than P11 million pesos and donated 246 tents to 135 hospitals.

All the Times She Had the Best Comebacks

Angel Locsin’s online personality is definitely worth mentioning. Aside from using her larger-than-average platform to speak up on important issues, she sometimes deigns to reply to folks who must have too much time on their hands. Best part is that she somehow manages to remain polite (to some measure) like when she told a critic to head to the mountains and help out “kaysa ho gamitin n’yo pa ho ‘yong oras n’yo sa pag-tweet sa akin? Inaano ko po ba kayo, ma’am para magalit ka nang ganyan?” Though our personal favorite has to be her succinct response to someone calling her “sayang” due to her having opinions.

Adventurer Savvy Angel Locsin Darna Staying In Heading Out
Your Guide to Thriving in This Strange New World
Staying
In? What to watch, what to eat, and where to shop from home
OR
Heading
Out? What you need to know to stay safe when heading out