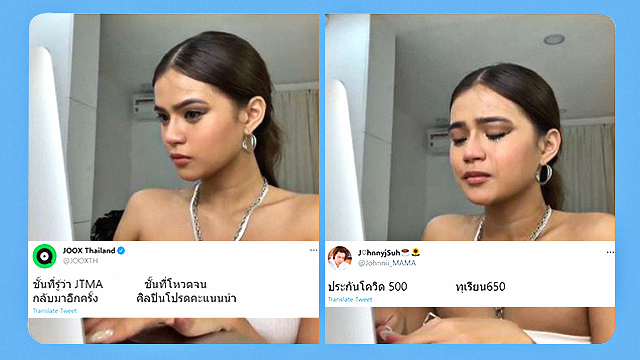 (SPOT.ph) Maris Racal is going international. We know you've seen all the quality meme content she's given us on the local network—and we're not the only ones who have taken notice. Folks over in Thailand have also joined the Maris Racal online following, or at least, they've been using one specific meme format. Remember that super relatable clip Racal posted of her having a breakdown then a glorious recovery while typing away on a laptop? Yup, the meme has crossed national borders!

The meme was first used on the Thai Twitterverse barely two weeks after it first went viral in the Philippines. Even JOOX Thailand, their local arm of the massive Asian streaming service, had to take part in the action. They used the meme on April 27 to talk about the JOOX Thailand Music Awards, an annual event they have been hosting since 2017. It's definitely apt that they used singer-songwriter Maris Racal's memes. Is it too much of a reach to think she might be part of the awards show someday based on a single meme?

Meanwhile, Racal is also taking care of her new domain. She posted a cheeky Tweet asking folks to "stop sharing [the Thai versions of the meme]" because she might end up being cast by GMMTV, a.k.a. Grammy Television, a.k.a. one of Thailand's biggest entertainment production companies. We hear you, Queen. She also reposted the clip to her Tiktok, writing, "Might as well post this here since patok siya sa Thailand," adding a "jk."

The 23-year-old Racal is carving out her own space online. She first rose to fame in the 2014 Pinoy Big Brother edition and has since been a part of both the showbiz and music scene. But it's really on her social-media pages where her cheeky and relatable nature comes to light. We'll leave you with this hilarious TikTok of her answering the question: Why do girls take so long in the bathroom?

Adventurer Savvy Maris Racal Humor Twitter Tiktok Thailand Staying In Heading Out
Your Guide to Thriving in This Strange New World
Staying
In? What to watch, what to eat, and where to shop from home
OR
Heading
Out? What you need to know to stay safe when heading out