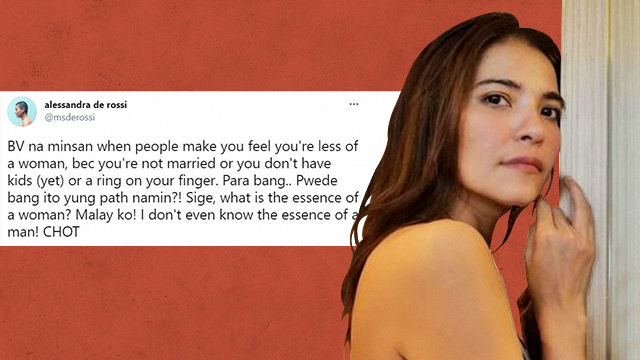 Use these tweets the next time someone asks "Di ka pa ba kasal?"

(SPOT.ph) Anyone else irked by your relationship status being the main measure of your worth—especially if you're a woman? We're clearly not the only ones, as proven by Alessandra de Rossi's recent tweets. The actress, singer-songwriter, and all-around creative posted a thread online questioning why it is that women who are unmarried or childless (or both) are seen as less of a woman.  If the words "unmarried" or "childless" in relation to "woman" made you feel not-so-good things, then we're sure you can relate to De Rossi's points.

De Rossi called it "BV"—meaning "bad vibes" or really just "pissed off" but in a nicer way—when women are put down because they aren't married with children, or at the very least, have a ring on their finger. "Pwede bang ito ['yong] path namin?!" she asked. "What is the essence of a woman? Malay ko! I don't even know the essence of a man!" she added in her trademark cheeky way.

This doesn't mean that she was taking away from women who are, either. "If motherhood or getting married is the best thing that ever happened to you, I'm happy for you," she wrote in a follow-up tweet. "I'm sure it is the happiest place to be. Pero okay naman ako sa Jollibee." Ultimately, whether Chickenjoy, a partner, or a child, it will always be a woman's choice—and you have no right to butt in and say what she should choose, much less judge her for it.

De Rossi added that you shouldn't use someone else's lack of what you believe are achievements to make yourself feel better-than. "I never asked for anything but my family's safety. I never prayed for a man or a career," she ended.

Her tweets have gotten a lot of traction on the local Twitterverse since she posted them on May 4. De Rossi has also replied to several folks agreeing with and adding their own thoughts to the matter.

So, What Is the Essence of a Woman? Let's Look Into Where Alessandra de Rossi Is Coming From

Look, De Rossi has done a lot with her life, dare we say more than the average person. It's obvious that what she does is fulfilling to her, so why is it that there are clearly some who have placed her on a lower rung because marriage and family aren't her top priority? Well, let us just spell it out. The age-old mentality of a woman's worth being measured by marriage and the type of family she raises remains strong today—unfortunately so.

Ask anyone who still thinks Maria Clara is the best a Filipina can aspire to be what the essence of a woman is and they'll undoubtedly point to the ability to procreate, nurture, and the like. And while those are all incredibly admirable, those aren't the only thing women are capable of doing, nor should a woman's success be measured by. Plus, we have to mention that women aren't factory-standard beings so stop asking questions that may unearth something deep-seated (or just, you know, stop being sexist).

Adventurer Savvy Twitter Alessandra De Rossi Staying In Heading Out
Your Guide to Thriving in This Strange New World
Staying
In? What to watch, what to eat, and where to shop from home
OR
Heading
Out? What you need to know to stay safe when heading out