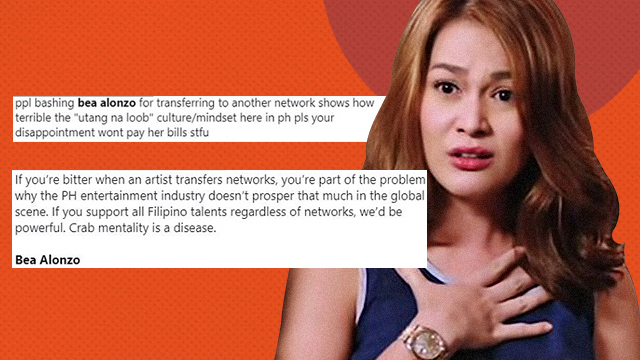 (SPOT.ph) GMA Network dropped news on June 30 that "One of the biggest artists in Philippine showbiz" would soon be touting their Kapuso label—promptly setting the Twitterverse on fire. The name on everyone's lips? Bea Alonzo! All the guesses were confirmed when the actor signed a contract with the network on Thursday, July 1. GMA confirmed the news on social media on the same day.

Way before confirmation though, folks were already 99.9% sure it was Bea Alonzo; just take a look at the snippet GMA shared in their promotion.

Note the red letters that spell out her first name! Real subtle. Plus, you know she's a superstar when you can instantly recognize her even with just a part of her face. Alonzo herself dropped a seemingly unrelated pic on her IG stories on June 29. It featured a pic from a shoot by celebrity stylist Pam Quinones, one that looked suspiciously similar to the photo used by GMA.

Needless to say, the shift from ABS-CBN to GMA-7 was huge news to loyalistas. Both Kapuso and Kapamilya fans had a lot to say even before the confirmation. There were some who couldn't understand why Alonzo would leave ABS-CBN, where she started out during her teen years (Remember Kay Tagal Kang Hinintay?).

Plenty of people referenced the ABS-CBN franchise renewal being rejected by Congress in 2020. Others even went as far as to say they were letting go of their status as Bea Alonzo stans if the rumours were true.

Meanwhile, others just wanted GMA to respect the showbiz queen—meaning that they asked the network to up their game. There was also talk of possible projects with John Lloyd Cruz, the other half of the OG love team. Cruz has already announced his showbiz comeback and is also expected to star in a GMA series.

This is the love triangle to watch.

Director Cathy Garcia-Molina has already confirmed there's a JLC-Bea Alonzo reunion film lined up for her, entitled No Goodbyes. And there's even a Bea Alonzo and Alden Richards starrer, too!

There were also some who called out the competition between the two networks, saying that it is part of the reason the entertainment industry is struggling to progress. Others pointed out the practical reasons behind the shift—hey, we all need to put food on the table—while others just wanted to see Alonzo continue her successful career. After all, the acclaimed actor has been delivering grade-A assignments for two decades now!

You know this one.

You can say that again.

We all have to make decisions.

Adventurer Savvy Gma Bea Alonzo Twitter
Your Guide to Thriving in This Strange New World
Staying
In? What to watch, what to eat, and where to shop from home
OR
Heading
Out? What you need to know to stay safe when heading out