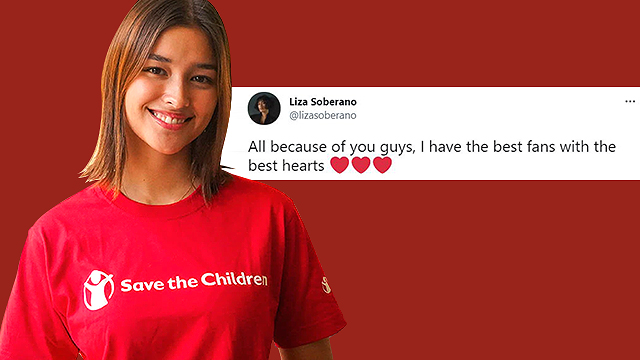 Liza Soberano Thanks Fans for Raising P500,000 for Save the Children

The fundraiser is at the half-million mark as of writing.

(SPOT.ph) Actress Liza Soberano took to Twitter to thank fans after her Save the Children fundraiser went way over their original targeted amount. "I have the best fans with the best hearts," she tweeted on Tuesday, August 3. And yup, the amount they were able to raise for the non-profit is proof of Soberano's statement; her fundraising page marks a flat P500,000 as of writing!

It looks like folks swooped in to make sure the Save the Children fundraising effort reached the clean half-million mark after Soberano's tweet. When she retweeted the shoutout of a stan Twitter account, the amount raised was at a little more than P2,000 short. A few hours later, the amount went up to P500,000.

Originally, Soberano started out her fundraising program with a P40,000 goal. Then on June 28, she posted on Instagram that they would be raising it after having already met the OG goal. But it looks like her fundraising campaign went above and beyond anyway, in a really good way, after their new target of P350,000 was met with P500,000 worth of raised funds.

The big jump comes after Soberano and her boyfriend, Enrique Gil, hosted a #LizQuen's Fan Day on July 28. Funds raised from the virtual fan meet went to Soberano's Save the Children program, which will help 530 families by equipping them with parenting and learning kits. The fundraising page says that P800 worth of "hygiene and learning supplies, and printed parenting materials on Positive Discipline" will be given to each family—imagine how many more families they can help with half-a-million pesos.

Soberano became a Save the Children Ambassador in April, after having been part of their donations program since 2016. She is one of the many celebrities who have used their much-larger-than-average platforms to help out during the pandemic. You can check out her advocacy, as well as the organization's goals, on her fundraising page.

Adventurer Savvy Liza Soberano Save The Children Staying In
Your Guide to Thriving in This Strange New World
Staying
In? What to watch, what to eat, and where to shop from home
OR
Heading
Out? What you need to know to stay safe when heading out