Best Fancy Details From Bea Alonzo Vlog Tour of New Van
Loading
Already a member? Log in
No account yet? Create Account
Spot.ph is your one-stop urban lifestyle guide to the best of Manila. 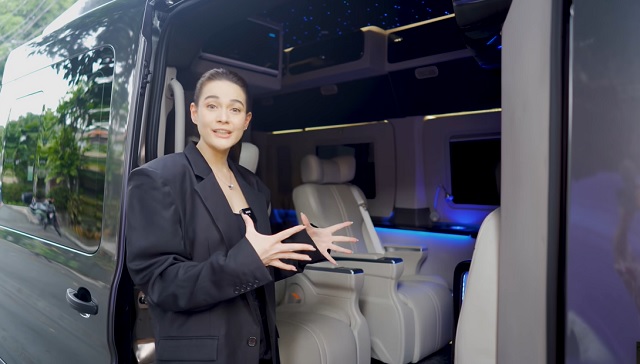 Her new taping van is an absolute dream.

(SPOT.ph) If you've ever passed along EDSA, then you know how terrible it could be to be stuck in your vehicle for a long, long time. Well, if we had Bea Alonzo's new van, we wouldn't mind even the longest traffic jams (as long as we're not the ones driving, maybe). The actress gave everyone a tour of her new van on her YouTube vlog—and it's an absolute dream! The massive vehicle is basically an upscale RV, complete with the fanciest details. We round up the coolest bits below.

Also read: Yup, Angel Locsin and Neil Arce Have a Mini "Armory" in Their Home

Bea Alonzo gave a tour of her new van and its fancy details:

Alonzo noted that she bought a new vehicle not just for her work (read: lots of shootings!) but so that she could have "a special place that could be a refuge." They even had the van customized especially for her current lifestyle—which of course includes pandemic protocols. It is basically a place where can pretty much live in during shootings, and TBH, it definitely seems like it would be a very comfy stay.

The "Captain's Chair" doubles as a massage chair.

So first things first, Alonzo had a truly special seat put in. Her "Captain's Chair," as she called it, can recline almost fully and has a multi-purpose jumper seat in front of it. Think like a Business Class seat on an airplane, which was Alonzo's inspiration for all the features. It even has a special pocket for wireless charging. And the best feature of all? Alonzo said that it is also a massage chair. Perfect for post-shoot recuperation. (Or to calm your brain cells while stuck in traffic.)

The van is equipped with an Alexa.

Alonzo admitted that she felt pretty "guilty" for putting in an Alexa but hey, we can't deny that having a virtual assistant is way cool. "I know di naman kailangan na kailangan but it's something I really want," she said. Aside from helping control the media center and the van's many light settings, Alexa can help you with the blinds! Just a super small detail that really helps give the van a futuristic feel.

The media center is no joke.

Speaking of the media center, there's a small control panel in front of Alonzo's chair where she can change up the lights and sounds, connect her phone via Bluetooth, and more. Don't be fooled by the tiny control panel, there's a bigger screen above that is the TV! And because the van has its own WiFi, there's Netflix, YouTube, and more too.

The van is so huge it needed an intercom.

You know those movies where the person calls their driver from the back of their limo? Alonzo has her own version of that! She explained that even if you can roll down the partition, the van is so big you would still have to yell to get the person driving to hear you—hence the intercom system.

Forget the whole shower-and-toilet on board, Alonzo has her own microwave.

The only thing that makes being stuck in a car worse is being "hangry" at the same time. Yup, Alonzo has a full overhead compartment full of snacks, and if they need to reheat food—wherever they are—the van also has a microwave.

Plus, tucked right under the control panel is a small drawer with a coffee machine. Yup, imagine getting a freshly brewed cup while on the road—Alonzo doesnt need too! We spotted what looks like coffee pods by the machine though Alonzo explained that she is more into instant coffee at the moment.

Check out all the cool details of Bea Alonzo's van below: