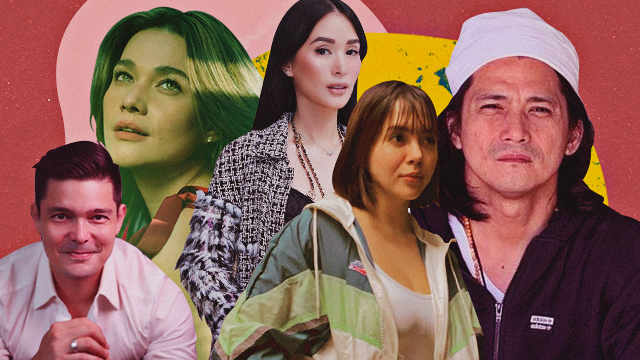 Today in Random: 10 Celebrities With the Most Unexpected Real-Life Names

Call them by their name-or names.

(SPOT.ph) Ah, Pinoy celebrities. They (and their movie-like love lives) have always been making headlines—so much so that we think we already know everything about them. Except that we don’t. We might not even know their real names. For all sorts of reasons, celebrities use names different from their birth names when they step into the spotlight.

Also read: 10 Times Pinay Celebs Were Totally Over Being Body-Shamed on Social Media

We round up 10 Pinoy celebrities that use an alias when they’re on the big screen:

If you’ve ever watched one of FPJ Ang Probinsyano’s more than 1,500 episodes (yes, there are that many), then the name Rodel Pacheco Nacianceno might seem familiar to you. That’s because that’s TV star Coco Martin’s real name and that’s how he’s credited as a producer on the show. In an episode of Gandang Gabi Vice, Nacianceno explained that the name was given to him by renowned talent manager Ed Instrella, who’s worked with Jaclyn Jose and Cherry Pie Picache. Nacianceno asked Instrella how he came up with the name, saying, “Sabi ko, 'Bakit Coco Martin?' Sabi daw, that time kasikatan ni Ricky Martin at saka ni Coco Lee. Sabi ko, 'Parang pinagtrip-an lang ako!”

Heart Evangelista’s real name is one of the showbiz industry’s not-so-well-kept secrets—well, because it’s not really that much of a secret. Heart, whose full name is Love Marie Ongpauco Evangelista, was born on Valentine’s Day, February 14. This is why she was named Love and given Heart as a nickname. If anything, it’s such a fitting name for a lovely Pinoy celebrity.

He’s one of the biggest names in the industry, but even Dingdong doesn’t know how he got his nickname. Born José Sixto Raphael González Dantes III, Dingdong has even gone on to launch his own eponymous delivery tech solutions startup. He’s previously shared that he sometimes uses “Jose,” to make it easier for other people but that it’s been his goal to ”use that name [Dingdong] to the point that it would literally ring a bell.” Well, whenever we hear it, what comes to mind is either him or the savory mixed nuts snack, so he’s definitely made it. But it’ll be a while before we learn the real reason behind his nickname because he says he doesn’t want to ask his dad just yet.

Fun fact: Ara Mina has had not one, not two, not three, but four screen names during her career. She’s gone from Ara Mina to Ara Mina Reyes to Dara Mina to Danica Gomez, then back to Ara Mina again, but her real name is actually Hazel Pascual Reyes. She got her screen name from the first names of her two younger siblings: fellow actress Cristine Reyes (whose full name is Ara Cristine Pascual Klenk) and Mina “Princess” Klenk.

Well, this isn’t a big surprise if you already know his Instagram username, but Robin Padilla’s first name is actually (and really) Robinhood. Seems like a fitting name for someone who’s starred in multiple action movies. Who knows, there might just be a Pinoy movie about his namesake with him as the lead.

Jessa Zaragoza made a name for herself when she was only 18 and sang what eventually became one of every Pinoy’s go-to karaoke songs, “Bakit Pa?” (you know, that song that starts with everyone’s favorite existential statement: “Parang di ko yata kaya…”). But that’s not actually her real name. Her real name is actually Richelle Ann Mallari Loyola. But if you ask us, “Jukebox Queen Jessa Zaragoza,” just rolls off the tongue a little bit easier.

Here’s something that any diehard AlDub fan would already know—Alden Richards is actually Richard Reyes Faulkerson Jr. He never intended to become an actor, but it was his mother’s dream for him to star in TV shows and movies and so when she passed, he made sure to make it happen with his screen name. And as we all know, he eventually went on to become one-half of one of the most successful love teams in Pinoy showbiz (and that’s saying something).

Montes—or rather, Schnittka—got her breakthrough role when she played opposite Kathryn Bernardo in the remake of Mara Clara on ABS-CBN. At the time, she was using the screen name “Mara Montes,” with the first name presumably from her real name. But Bernardo’s character on the show was also called Mara and so to avoid confusion, “Mara Montes” became “Julia Montes.”

Born as Krista Elyse Hidalgo Sullivan, Bela Padilla got her start in showbiz when she was scouted during one of her field trips. She eventually joined Star Magic with the stage name “Krista Valle.” Then she switched to “Krista Sullivan” as a freelance actress. She eventually left Star Magic to move to GMA where she started using the name we now all know her as—Bela Padilla. But also to answer the question that’s at the back of your Pinoy showbiz-loving mind—yes, she’s related to Daniel Padilla, Robin Padilla, and the other Padillas in the showbiz industry.

Adventurer Savvy Humor Celebrity Ara Mina Dingdong Dantes Bea Alonzo Heart Evangelista Coco Martin Robin Padilla Jessa Zaragoza Alden Richards Julia Montes Bela Padilla
Your Guide to Thriving in This Strange New World
Staying
In? What to watch, what to eat, and where to shop from home
OR
Heading
Out? What you need to know to stay safe when heading out