Did Star Trek invent the PC, the cellphone, the rainbow connection?
Loading
Already a member? Log in
No account yet? Create Account
Spot.ph is your one-stop urban lifestyle guide to the best of Manila. 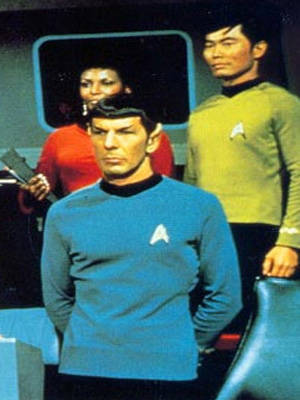 Did Star Trek invent the PC, the cellphone, the rainbow connection?

Think about the ’60s, and two things come to mind. First, a famous leader who had the reputation of being a ladies man, and second, the seemingly endless obsession with outer space. No, I’m not referring to JFK and the space race between USA and USSR, but to Captain James T. Kirk and Star Trek the original series. 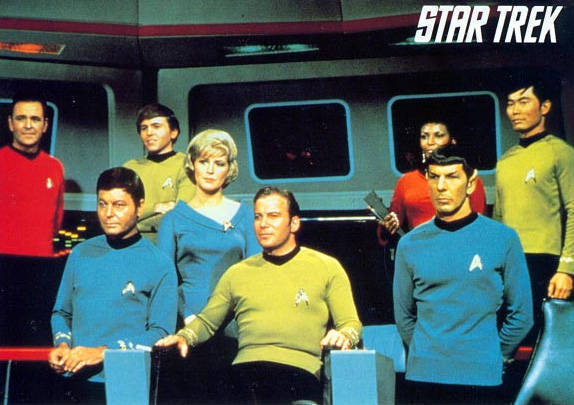 Think about the ’60s, and two things come to mind. First, a famous leader who had the reputation of being a ladies man, and second, the seemingly endless obsession with outer space. No, I’m not referring to JFK and the space race between USA and USSR, but to Captain James T. Kirk and Star Trek the original series. Star Trek, first aired in 1966, became the gold standard for science fiction shows during its time, and perhaps even beyond that. Unfortunately, not a lot of ’60s people tuned in so the show got cancelled three years later because of low ratings. Once dreamed of by a former WWII bomber pilot and police officer, Star Trek didn’t start out as the legendary show that it is now.

Gene Rodenberry first pitched the idea of the show as some sort of space western with naval adventure thrown in. Thus, there’s a lot of frontier (space) exploration and a ship with a full crew and a captain. The show’s setting, revealed later to be the 23rd century, naturally became an opportunity to showcase mind blowing future technology. No one seemed to mind too since short hemlines were still all the rage in the future.

While some may remember William Shatner’s questionable acting, the tacky sets and locations, lousy alien makeup, and shoestring special effects, the very same show became an inspiration to many. Of course, back in the day most of them were still kids who dreamed of hooking up with attractive green-skinned she aliens Kirk-style. Eventually they all grew up to become scientists and inventors who kept the dream of Star Trek alive in their hearts. Some of them devoted their lives to making those dreams come true, sort of. Who are these people and what did they invent? Why aren’t we having picnics on strange planets yet and beaming down on their surfaces like crazy? Star Trek may still be three centuries in the future, but there’s a lot of Trek stuff that seems to have arrived quite early, if not prematurely. For some other whiz-bang stuff like the warp drive and photon torpedoes, we might still have to wait a wee bit longer, even if scientists, like Scotty and the Enterprise, are now giving all that they’ve got.

Uhura’s Universal Translator Babel Fish? The Universal Translator was an indespensible device primarily used by Star Trek’s communications officer. In later episodes, other crew members were using it as well. The small cylindrical piece of metal sticking out of Uhura’s ear was ground breaking for a number of reasons. It was a wireless single unit headset that could translate different languages into (presumably) English or something intelligible to humans. It is very much the precursor to the Bluetooth headset, excluding the latte on one hand along with the silly appearance of talking to oneself. Over at the United Nations, delegates can wear a special headset where they can hear a real-time translation of foreign languages spoken on the General Assembly meeting floor. Human UN interpreters still handle the task of translation but it isn’t hard to envision that one day, computers will be up to the job of translating. For the time being, we have Babel Fish and the clumsy text box.

Ion Propulsion. In the Star Trek episode "Spock’s Brain", the crew encounters a strange alien spacecraft which Spock declares to have high velocity ’ion propulsion.’ Scotty is very much amazed at the ship and tells Kirk that they could probably learn a lot from it. Traditional real-world rocket propulsion systems used standard chemicals for creating thrust. Dr. Marc Rayman, the chief propulsion engineer for NASA and JPL (Jet Propulsion Laboratory) has worked on several deep space probe projects which use a unique propulsion system powered by, wait for it, ion rockets. The ion rockets uses electrically charged (ionized) xenon gas and propels the craft up to ten times faster than standard rockets. Will ion propulsion eventualy give way to the incredible Star Trek warp drive? Will Shatner ever win an Oscar? I’ll leave the answers to you.

Bone’s Tricorder Skin Scanner The tricorder, used by Star Trek crewmembers, is multi-purpose device that scans, analyzes, and records data. As the ship physician, Leonard ’Bones’ McCoy uses a specialized medical tricorder to scan patients, analyze their medical condition, and help him make an accurate diagnosis. As a pocketable computer, the modern day PDA or smart phone can perform most of the functions of a Star Trek tricorder. Last year, a team of Georgia Tech researchers have developed a handheld device that can scan the skin and analyze the tissues under the surface. The device can be used to quickly diagnose subcutaneous cuts and bruises. The device is designed to be easily used by clinical personnel with who have no specialized training or cantankerous personality and strong racial bias against Vulcans.

Spock’s Console Personal Computer. In the 23rd century, computers are extremely user-friendly and ubiquitous. The Enterprise is packed to the rafters with all kinds of computers such as handheld units, desktops, and kiosk mounted units. Most of the computers respond to voice commands too. While we may all now easily take these machines for granted, computers in the ’60s were big as rooms and needed several people with special training to operate them. Even then, you couldn’t even do much with them.

Enter the Altair 8800, one of the world’s first commercial microcomputer. Introduced in 1975 by Ed Roberts, an electronics pioneer, the Altair 8800 is essentially the granddaddy of all modern computers. It didn’t take up a room either since it was only as big as a stereo component. The computer takes is name from an episode of Star Trek where the crew goes to Altair Six. Back when they were starting out, Steve Jobs and Bill Gates had Altair computers to play with. It’s hard to imagine how they would’ve just spent away their geeky energies if they didn’t have an Altair home computer at the time.

The Communicator Fliptop Handheld Phone. Keeping in touch was a big thing in Star Trek. Captain Kirk sure made this clear when dealing with the female specie, human or otherwise. For the rest of the crew, they used a wireless handheld flip-top device that can carry voice communications over great distances i.e. between people from the other side of a planet or a space ship in orbit. Nowadays, we have exactly that and we can thank one guy for it.

Martin Cooper, a Motorola chief engineer during the ’70s, drew his inspiration directly from the Star Trek Communicator. In his first attempt, he came up with a wireless handheld phone that weighed over a kilogram. Eventually, the hardware shrunk further until it resembled Star Trek’s infamous chirping flip top device. It’s probably no coincidence that Motorola called the world’s first flip top cellphone the StarTAC.

The United Federation of Planets Multiracial Harmony This isn’t a gadget at all but a radical concept of social proportions. The 23rd century was envisioned by Star Trek’s creator as free of global conflict and cultural biases. Thus, the crew of Star Trek was intentionally multi-racial and multi-gendered. Consider these crew members: Spock, an alien/human hybrid, Uhura, an African-American woman, Sulu, a non-stereotypical Asian man, and Chekov, a Russian guy. In a sci-fi setting, the apperance of interplanetary beings might be a given, but the rest really shook up the conventions of its time. Before Uhura (Nichelle Nichols), no African-American woman appeared in a prominent role on a regular TV series. Asians were always depicted as villains during Sulu’s (George Takei) appearance. The casting of a Russian character as one of the series mainstays was trully revolutionary, especially when you consider that Star Trek was made at the height of the Cold War and the space race.

Dr. Mae Jamison, the first African American to go to space, credits Uhura as one of her inspirations for launching a career with the US space program. Multiculturalism has gone a long way since the ’60s and it’s no exaggeration to say that the movement has a small debt to pay to Star Trek for coming up with the idea more than four decades ago.

To see where Star Trek is showing, click here.

Gadgets Star Trek
Your Guide to Thriving in This Strange New World
Staying
In? What to watch, what to eat, and where to shop from home
OR
Heading
Out? What you need to know to stay safe when heading out