Can Megan Fox do Red Carpet better than Angelina Jolie?

At last week's premieres of  Transformers:  Revenge of the Fallen in Tokyo and Berlin

And at the premiere in London:

Touted by the media as "the new Angelina Jolie," Megan Fox, reported to be eyed by producers to replace Jolie as Lara Croft in the new Tomb Raider movie, sizzled at red carpet appearances at recent premieres of  Transformers:  Revenge of the Fallen all over the world and made what seems to be a bigger impact than Jolie's more subdued entrances of late.

Fox said she resents the comparison.  "I'm not the next anyone," she says  in the latest issue of  Entertainment Weekly."It's a lack of creativity on the media's part," she claims. "Because I have tattoos and dark hair and I was in an action movie? That's as far as the similarities extend."

But judging from her mug invading June 2009 magazine covers (Elle, Esquire, GQ, Maxim, even our local edition of  Ok!) it looks like Fox's star is rising higher and hotter than Jolie's. "Megan has a lot of things Angelina doesn't–charm, humor, and a disarming vulnerability..." says Ok! editor Frances Amper,"I do believe she'll be a powerhouse one day, if she plays her cards right." 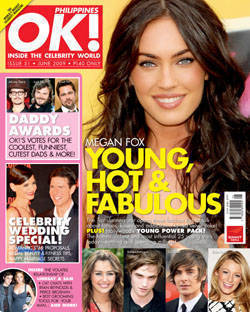 Who would you rather see as Lara Croft in the new Tomb Raider movie? Take our poll on SPOT.ph's HOME page.

Megan Fox Angelina Jolie Transformers Tomb Raider Ok Premiere
Your Guide to Thriving in This Strange New World
Staying
In? What to watch, what to eat, and where to shop from home
OR
Heading
Out? What you need to know to stay safe when heading out