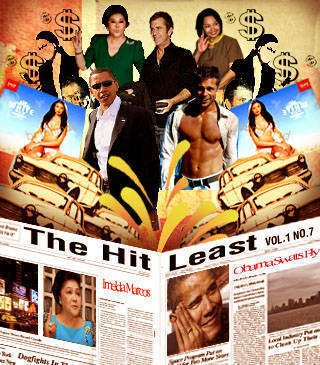 The Hit Least #7: Last week's lowlights in the news

1. BARACK OBAMA SWATS FLY WITH BARE HAND DURING CNBC INTERVIEW. Next they'll be telling us the guy can walk on water.

A roundup of the past week's lowlights in news and pop culture.

1. BARACK OBAMA BEATS BRAD PITT IN POLL AS MOST FASHIONABLE MAN, SWATS FLY WITH BARE HAND DURING CNBC INTERVIEW. Next they'll be telling us the guy can walk on water.

2. FLYSWATTING OBAMA GETS FLAK FROM PEOPLE FOR THE ETHICAL TREATMENT OF ANIMALS (PETA). For their tireless efforts on behalf of the multitudes of disease-carrying insects, we award PETA a vacation in one of our dengue-infested slums.

4. MEL GIBSON PRODUCES RUSSIAN GIRLFRIEND'S ALBUM. If you've seen the way Mel looks lately, I guess it was inevitable that we would call him Mel "Puffy" Gibson.

5. DPWH BLAMES SEXY BILLBOARDS FOR TRAFFIC JAMS. After all, temptation is the root of all misfortune. Next they'll be telling us global warming is caused by excessive chocolate-eating.

6. IMELDA MARCOS IN TUG-OF-WAR WITH GOVERNMENT OVER POSSESSION OF JEWELRY WORTH P15 BILLION. It's like watching two aging drag queens wrestle over bling. Only sadder.

7. NEW YORK MAN CHARGED WITH FRAUD FOR DRESSING LIKE HIS DEAD MOTHER TO GET GOVERNMENT BENEFITS. It's like Psycho, only without those deadly showers.

8. IOWA TEEN WHO SHOOTS OFF 14,000 TEXT MESSAGES A MONTH WINS TEXTING CHAMPIONSHIP. We hear she managed to text her friends a message saying "OMG I rily 1!" before her thumbs went into permanent paralysis.

9. MALACAÑANG JUSTIFIES GMA'S RECENTLY FREQUENT SORTIES TO PAMPANGA BY SAYING SHE "REALLY LOVES HER CABALENS." Bet she'd love them even more if they voted her into a Congressional seat.

10. GENERAL MOTORS FACES $25 BILLION PAST DUE NOTICE FROM CREDITORS. I wonder how many fake family emergencies $25 billion covers?