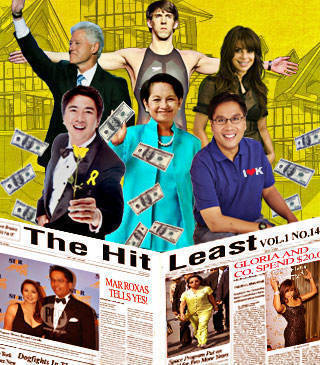 THE HIT LEAST #14: Your Cheat Sheet to the Hit Headlines

2. MALACAÑANG SAYS GMA's $20,000 DINNER AT LE CIRQUE PAID FOR BY REP. MARTIN ROMUALDEZ. Because we all know Leyte is one of the richest provinces in the country.

2. GLORIA AND CO. SPEND $20,000 AT NY RESTAURANT DURING U.S. TRIP; MALACAÑANG SAYS LEYTE REP. MARTIN ROMUALDEZ FOOTED THE BILL. Because we all know Leyte is one of the richest provinces in the country. 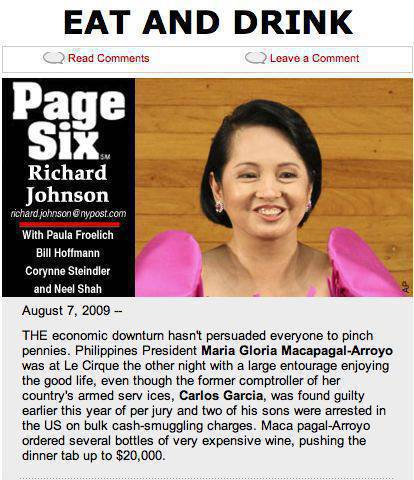 4. MAR ROXAS WANTS TO RENAME PARTS OF EDSA "CORY AQUINO AVENUE". Sen. Gil Puyat Ave. is still Buendia. Chino Roces Ave. is still Pasong Tamo. Maybe Mar should take his pedicab out for a spin and look for an idea that will…oh, I don't know…really help this country?

5. WILLIE REVILLAME DEMANDS THAT ABS-CBN STOP SIMULCASTING LIVE FEEDS OF TITA CORY'S FUNERAL CORTEGE WITH HIP-GYRATING GIRLS ON WOWOWEE! You know the world is coming to an end when even tactless Willie has a valid point.

6. PAULA ABDUL OUT OF AMERICAN IDOL; CREATOR NIGEL LITHGOE SAYS "WHEN THE HISTORY BOOKS ARE WRITTEN, PAULA, SIMON, AND RANDY WILL BE THE HISTORY-MAKING TRIO OF AMERICAN IDOL." I thought history books were written about revolutions and heroes. Who knew they were about mindless reality shows and crazy judges?

7. 7-YEAR-OLD UTAH BOY HIJACKS FAMILY CAR TO SKIP CHURCH; FATHER FROM QUEBEC POSTS YOUTUBE VIDEO OF 7-YEAR-OLD SON DRIVING CAR WITH HIS FAMILY INSIDE. How cute. Now let's talk about getting a license to have kids.

9. DUBAI NIXES CHANCE TO STAR IN NEXT SEX AND THE CITY MOVIE. I'll have to side with Dubai on this one. Burkas and Blahniks do not go together.