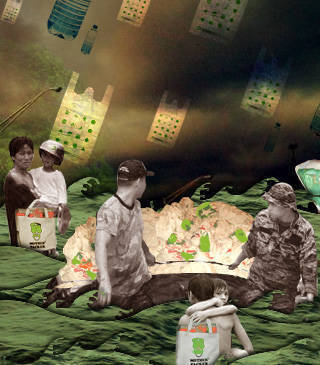 From using pillowcases to donating reusable utensils, read up on the green deeds you can do. Plus, how can "selling" relief goods be environmentally friendly?

The Pinoy bayanihan spirit is alive with relief drives for typhoons Ondoy and Pepeng victims sprouting everywhere, but what happens to all the plastic packaging that piles up after the relief goods have been packed and distributed? SPOT.ph asked around for tips on how to stay green while helping.

REDUCE the use of plastic as much as possible:

REUSE whatever can be reused:

- Donate reusable eating utensils, also from Miriam Quiambao's list. It's more expensive but cheaper and greener in the long run since people won't have to throw out plastic utensil after utensil.

- Reuse plastic bags, cartons and clothes. "We used the leftover cartons as props and containers, while the plastic bags were reused to repack relief goods," says Ruth Miguel who volunteered at the Eat Bulaga relief operations. Donated clothes that can no longer be used became rags at the Greenhills Christian Fellowship Ortigas Centre, says volunteer Dan Ramos.

"Not one solution will fit every problem," Froilan Grate, president of Mother Earth Foundation, says. He shares the green efforts of Green Releaf, a network of different volunteer organizations, which they piloted in San Mateo, Rizal:

1. Sourcing. Organic food and food that use minimum packaging are the ideal. Noodles, for example, use a lot of packaging for its seasonings and the actual noodles.

2. Repacking. The practice in relief drives is three plastic bags per relief pack: for the rice, clothes and other groceries. Minimize plastic use by piling the groceries and clothes on top of the rice in one plastic bag. For volunteers in evacuation centers, Grate suggests using reusable bags that the evacuees return to get their next batch of relief goods. A reminder printed on the bags: "Don't throw me away. Use me after."

3. Group relief efforts. Instead of packs per family, give wholesale goods for an entire community. In San Mateo, residents were asked to put their goods in shirts tied up at the ends.

4. Sell relief goods. Residents pay for the goods, not in cash, but in plastic. For "luxurious" items like cupcakes, residents surrender five clean and usable plastic bags. "We create a consciousness among people that plastic bags should be returned or reused," Grate says.

5. Feeding programs. In San Mateo, Green Releaf cooked food that residents ate with their reusable eating utensils. For those that had none, Green Releaf lent them utensils. "They ate hot, organic and nutritious food, not canned goods. There was no need to repack," Grate says. "They can help cook and it's a different atmosphere when they eat together. There's no need to fight for relief goods. Also, it lessens their self pity because they feel that they are part of the solution." Feeding programs work best with an organized committee.

"Relief drives, I think, can't be totally environmentally-friendly unless we can find sustainable alternatives to plastic bags and bottles. It starts with our daily habits. When the supply for plastic dies down, manufacturers will just stop making them, right?" says DJ Patti Malay who volunteered at Megatent, Santuario de San Antonio and Victory Pioneer.

"Education, information dissemination and a government that's serious about being environmentally, not just aware, but vigilant as well," Malay adds. "There's no space for dillydallying and complacency anymore. If we're not convinced of that yet, then expect Ondoy to be the first of a series of catastrophes."

-       Relief organizers who need to dispose of large amounts of plastic can contact companies like Newfoundland Plastics, which buys plastic to recycle.

SPOT.ph wants to know: What are your suggestions for an environmentally friendly relief drive?

Climate Change Environment
Your Guide to Thriving in This Strange New World
Staying
In? What to watch, what to eat, and where to shop from home
OR
Heading
Out? What you need to know to stay safe when heading out