SPOT.ph blogger Ria Limjap takes a tour through Escolta in all its old glory. 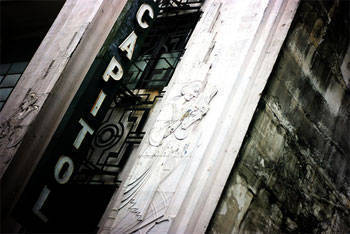 My weekend was Escolta-themed: Friday afternoon I caught a screening of Nick Deocampo's documentary Cine > Sine which traces the influence of Spanish culture in Philippine cinema. Deocampo builds a virtual world using three dimensional animation, historical footage, old photographs, and newspaper notices to recreate fin de siècle Manila, a vibrant city on the brink of revolution and a new century. Turns out the first ever screening in the Philippines was presented by a Spaniard named Francisco Pertierra, who presented a program billed Espectaculo Cientifico de Pertierra in a listening salon at Numero 12, Escolta. It cost a few centavos to sit on a bench, a few more for a chair.

And then on Saturday, Carlos Celdran was doing one of his famous downtown walking tours. "I'm trying a new route," he said. Here was my chance to walk down Escolta and wonder where Señor Pertierra showed his film. I decided to tag along.

(Carlos promised to bring me to this hole-in-the-wall restaurant called Singaporean Hainanese Chicken Rice where they serve–you guessed it, Singaporean Hainanese Chicken Rice. It's on Tomas Pinpin and the chicken is amazing. It's worth noting that there are several food stops sprouting on Escolta. There's Polland Café on the corner of Yuchengco, where the hopia is always fresh and it's nice to sit and watch the kalesas. Then there's Escolta Ice Cream Bar, an honest-to-goodness ice cream parlor that serves sundaes, cones, and short orders. Uno Seafood Restaurant on the ground floor of Calvo Building looks like a promising place for good Chinese. That art deco beauty, the Capitol Theater, was also supposed to become a Chinese restaurant, but it remains sadly gutted and unfinished.)

As I wandered around Escolta, I tried to picture the sad old street at the height of its glory: luxury department stores that sold diamonds and imported goods, fancy rooftop night clubs like Luisa's where the bright young things of Manila society went to dance and mingle. The length of Escolta was the prime commercial area of the city; in its heyday it must have been fabulous.

Deocampo's documentary, which he calls a "first in a series of ten" about the history of Philippine film, starts off in Escolta. An award winning filmmaker and passionate educator, Deocampo fuses historical facts with clips from classic Filipino films to illustrate the far-reaching influence of Spain in our culture. (Do you ever wonder why the mata pobre upper crust contrabida is usually tisoy?)

Audience literacy is Deocampo's goal: that is, educating the audience about film and at the same time raising questions about our identity, both national and personal. "We all have stories but can't remember it anyway," sang Nina Simone. We should bother to find out what they are. Our stories are written on our streets, faces, and films if only we choose to look deep but not so far.

***
P.S.
The schedule for CinemAlexis was moved to accommodate relief efforts but here's the new schedule. All screenings at Mogwai Cinematheque in Cubao Expo.

Escolta Philippine Cinema
Your Guide to Thriving in This Strange New World
Staying
In? What to watch, what to eat, and where to shop from home
OR
Heading
Out? What you need to know to stay safe when heading out