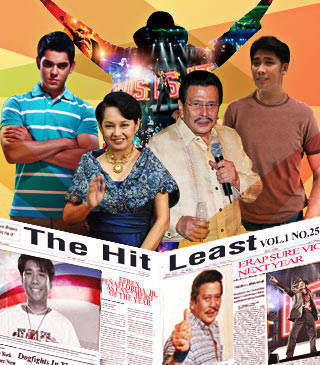 The latest Richard Gutierrez scandal + more of the week's lowlights

1.       U.S.-BASED FILIPINOS ENCOURAGED TO VOTE ONLINE FOR CHILDREN'S CRUSADER EFREN PEÑAFLORIDA, JR. AS CNN "HERO OF THE YEAR." Hey, if we can win Miss Photogenic at the Miss Universe pageant through online voting, I'm sure our brothers abroad can do this!

2.       ERAP SAYS HE IS SURE OF VICTORY NEXT YEAR. I'm not so sure about Erap running again. Sequels are rarely better than the original…and the original wasn't that good to begin with.

5.       COLORADO AUTHORITIES CHASE WEATHER BALLOON WITH 6-YEAR-OLD BOY TRAPPED INSIDE; BOY REVEALED TO BE HIDING IN ATTIC. It has been confirmed that the boy's name was not in fact Bart, and the father did not exclaim "D'oh!"

6.       BABY IN AUSTRALIA SURVIVES AFTER FALLING UNDER TRAIN.
Now there's a baby album I'd like to see!

7.       NEW MICHAEL JACKSON SONG "THIS IS IT" RELEASED ONLINE.
Some titles are just too obvious.

10.       RICHARD GUTIERREZ INVOLVED IN AIRPORT TIFF FOR ARRIVING LATE AT DEPARTURE GATE, ALLEGEDLY SPIT ON BOARDING PASS. Hey, Mr. Environmentalist! Do you know how many trees died to make that boarding pass?

Richard Gutierrez Hit Least Politics Erap
Your Guide to Thriving in This Strange New World
Staying
In? What to watch, what to eat, and where to shop from home
OR
Heading
Out? What you need to know to stay safe when heading out