For World AIDS Day, awareness advocates wear nothing but red ribbons
Loading
Already a member? Log in
No account yet? Create Account
Spot.ph is your one-stop urban lifestyle guide to the best of Manila. 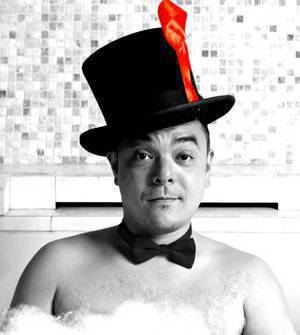 AIDS awareness advocates strip off their inhibitions and wear their cause on their sleeves in support of World AIDS Day.

December 1 is World AIDS Day and while the Philippines is not yet on the list of countries with the most number of reported cases, there has been a recent increase in the annual reported number of new HIV cases in the country, according to the United Nations AIDS Epidemic Update as of 2007. Reported cases rose from 193 in 2003 to 309 in 2006.

Along with the reported cases are stories of people living with and affected by the life-threatening disease. SPOT.ph turns the spotlight on some of the HIV/AIDS awareness advocates, each with their own stories to tell and revealing why they are baring it all for AIDS awareness:

Celdran's youth was marked by living a carefree life in New York City, which he discloses included a bi-sexual lifestyle.

"I was living and working in New York in the '90s. Back then when you met someone at a bar, the line of questioning was always: 'What's your name? What do you do? Where do you live? And are you HIV positive?' We might have been a bit promiscuous, but always careful and used condoms."

Celdran continues, "There are a lot of advancements that have been made in the field of HIV/AIDS in the last decade, and it's true that the infection is no longer a death sentence, but it's not something to be taken lightly either. There are a lot of people now who don't protect themselves because they are ignorant or complacent."

"Information is power and silence equals death. Don't be ignorant about HIV. Not only to protect yourself, but also the ones around you. HIV is a journey that affects everyone you love and who love you back.

Hopefully, the MSM community/other bisexual men out there will learn not be ashamed or confused about who or what they are and most of all, be careful in what they do."

Kunawicz, one of the hosts of XYZ, a now defunct television program in the '90s that dealt with issues on women empowerment and reproductive health. The show was considered both progressive and ballsy - it is said that it was on XYZ when a condom was first seen on national TV. Using executions that were light and humorous like a condom quiz, XYZ was able to communicate messages about safe sex in a language that the youth could understand and relate to.

In 1999, because of her work on XYZ, Karen was invited to speak at the 5th International Conference on AIDS in Asia and the Pacific in Kuala Lumpur where she presented the youth view on HIV/AIDS.

"Some of the findings of my presentation showed that the youth viewed HIV/AIDS as somewhat a solitary issue. It had to be related to something else like sexual health,   overpopulation or poverty in order to be relevant to them."

Today, Karen says that she still sees a similar problem except that, "The issue of HIV/AIDS is eclipsed by other issues like now hot topic climate change and Typhoon Ondoy. And this goes for everyone, not just the youth."

Gallaga came out on national television when he discovered he was HIV positive. Soon after he was often asked questions about STDs and HIV, often from people he didn't even know and sometimes through social networking sites he is a part of.

Such questions underscore the need for better access to information on HIV/AIDS, which Gallaga hopes to help address by sharing his own experience with as many people as possible. Working with UNAIDS and DOH, he shares his story with the communities these organizations assist.

As part of the UN commercial on the Millennium Development Goals (MDG) in 2015, Gallaga calls for the need to meet the MDG on HIV. He also helped out the Philippine General Hospital (PGH) to raise money for a new CD4 machine, which determines the strength of one's immune system.

"People have told me my disclosure has helped them realize it can happen to anyone and that if they have the same lifestyle as I used to have, they are at risk.   Some people have begun to take better precautions while others have found the courage to take the test.   I've spoken to a few people who are living with the disease and have started to open up about their condition to close friends and family.   To stop living with the secret, I think that's important as well."

In 2005, Romina's friend had an "AIDS scare." He asked Romina to go with him to get tested.

"I was a bit freaked out–it isn't everyday a friend tells you that they'd like to get tested. I didn't press him for details. I just told him I'd be there to support him and if he wanted me to get tested too, for companionship's sake, I would," Romina shared candidly.

Being at an STD testing center was not at all what Romina thought it would be. "I was really scared. I had this image of us entering and the staff immediately judging us as 'dirty' or promiscuous, but they were very gentle when they talked to us about our lifestyle choices. They gave us brochures and told us to think about it [getting test] first."

Looking back on the experience, Nanagas thinks that everyone should get tested. "I'm in PR–a business of changing perceptions and building images. HIV/AIDS is a cause where right now, a change in perception about something like getting tested may be life-saving. There's a misconceptions that HIV/AIDS is a 'gay disease'. It's these misconceptions that make straight people think they don't need to get tested.

I bared everything for this shoot. Hopefully our shared experience will encourage others to be brave enough to get tested."

Candice, was what one may be termed as an avid HIV/AIDS awareness advocate, albeit in a very consumer way.

"I would always buy special edition HIV/AIDS memorabilia made by certain brands. It was my own way of supporting the cause," says Candice.

"In the Philippines, I think we're aware of the current [HIV/AIDS] situation here, but we still need more push. We still have this kind of thinking that only certain people can get infected, but in reality all of us can be infected...in more ways than we thought possible. No one is spared unless we're aware and unless we're safe.

"This experience has given me the chance to help. I believe that no matter how big or small 'help' or participation maybe, it can still make a huge difference. I'm making a stand that we can all choose to be more than just passive supporters of HIV/AIDS."

Hiv World Aids Day Aids
Your Guide to Thriving in This Strange New World
Staying
In? What to watch, what to eat, and where to shop from home
OR
Heading
Out? What you need to know to stay safe when heading out