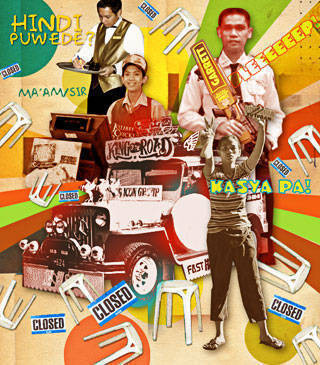 Only in the Philippines: 10 Things That Make Us Go "Ha?"

SPOT.ph asks: What's up with those Monobloc chairs chained to store doors? And other things that sometimes boggle our minds about our beloved Manila. 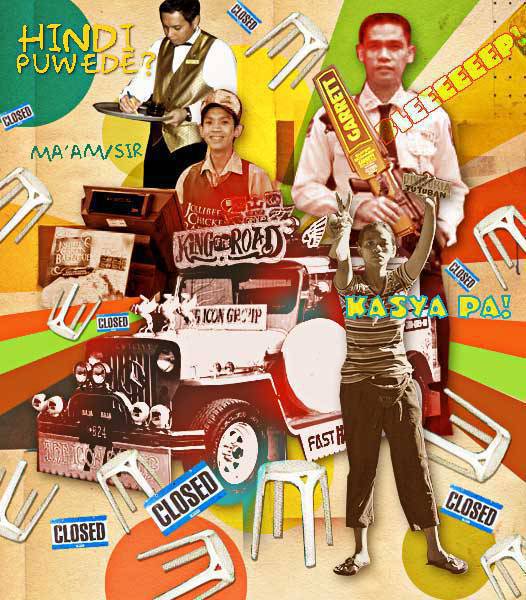 Like Korina Sanchez' moving white wedding tent, these everyday occurrences in our beloved city that constantly make us scratch our (and some of our foreign friends') heads in bewilderment. Know the answers to these perplexing puzzles?

1. When stores in the mall are closed, why are plastic Monobloc chairs chained to their door handles? Do these chairs instill fear in thieves and dissuade them from breaking in? Maybe the Rolex store in Greenbelt 5 should have used these powerful plastic chairs as anti-robber amulets.

We once heard a plausible explanation: The chairs are used by mostly not-so-tall salespersons as stools they can stand on when they open the store in the morning–in order to reach the locks at the top of the door.

2. Why do fast food servers call you Ma'am-Sir even if you're by yourself and obviously not both? Is all that grease making them see double? At least we're not alone: we heard about the French version of "ma'am-sir" in Nice, where the maitre d' of a certain restaurant calls male and female customers "monsieur-dame."

3. Why do mall or building security guards poke a wooden stick into your bag without even looking inside–or even when you're already holding your bag wide open? Perhaps the stick is of the magical variety that will change color or bleep if it senses something objectionable? Unless that stick can diffuse a bomb in your bag, there's just no point–aside from the fact that it's really annoying.

Next time a guard carelessly pokes a wooden stick into your bag without actually examining its contents, tell on him or her. Sanctions await security guards who don't follow protocol, says SM Sucat's Customer Relation Office.

4. Explain this: When a guard waves his metal detector across your bag and the detector bleeps, you can enter. When it doesn't bleep, you can enter, too.

In Greenbelt 2 and Greenbelt 3, the metal detectors continuously bleep when they detect metallic objects in bags. Security Head Jimmy Gabayao claims that's when they ask to search your bag. If they can't find metal objects inside, Gabayao says the bleeping is probably due to a metallic part of your bag or outfit.

5. Why do airport security guards check only your car's glove compartment for bombs or guns? Did they ever consider the possibility that you've hidden your weapons under your car's seats, in a bag or suitcase or in the trunk? According to the NAIA Office of the Assistant General Manager for Security and Emergency Services, indeed, only the trunk and glove compartment of each car need to be inspected in the checkpoints of the arrival and departure terminals. Er…

6. Why do cashiers always ask if you have a smaller bill or change? Isn't that why she's called a cash-ier? We realize they don't want to run out of change (or don't really want to run out for change) but shouldn't it be store policy to always have change, just as it should be against store policy to repeatedly ask for odd amounts of P5, P1.25, or 40 centavos as if they're on The Price is Right?

7. When passing between two people, why do Pinoys pretend they're sharks (i.e. arms outstretched and palms together as if getting ready to dive)? While we're on the subject, why do Pinays bend their knees with their palms covering their chests (even if there isn't any exposed decolletage to cover) when passing through a crowd or in front of other people? We suppose Pinays do it to be polite (or for the cleavage covering move, out of habit) but we suspect slapstick comedy is behind the shark attack.

8. Why do jeepney barkers say there's room for three more passengers in a jeep when not even one could possibly fit? In the skewed world of jeepney barkers, spacious means only half a butt will fit. They're obviously trying to make more money but we wish they'd take pity on the poor passenger who'll be literally hanging on to the edge of his seat during the ride.

Commuter tip: Don't ask bus conductors if the bus still has room because chances are, there is room–for you to stand in. Instead, ask them if there are still seats.

9. Why is it that when you ask a server in a restaurant if the cook could hold the meat from a certain dish, they automatically say "hindi puwede"? It's not as if you're demanding they lower the price of the dish because fewer ingredients will be used (though that would be nice). Perhaps management may think the dish won't be as good if the ingredients are incomplete, or perhaps the waiter simply fears the cook's ire,   but the customer, who might be allergic, vegetarian or on a diet, is always right.

10. How come you can only buy stored-value MRT cards from one ticket window per station? You have to dive into the winding lines and wrestle your way to that one window when they can just as easily sell it in all windows.

While it seems like only one ticket window per station sells the cards, the MRT office insists that their Quezon Avenue station (southbound) has three that do, while their North Avenue and Boni Avenue (southbound) stations each have two; and their Buendia and Ayala center platforms have two each that sell the cards. In all other stations, only one ticket window sells the cards for "easy monitoring and identification [and] faster transaction especially when sold [from] the exact fare window," says the MRT office. Has this been the case for you?

SPOT.ph wants to know: What are the other things make you go, "Ha?"

Pinoy Miss World Philippines 2018
Your Guide to Thriving in This Strange New World
Staying
In? What to watch, what to eat, and where to shop from home
OR
Heading
Out? What you need to know to stay safe when heading out