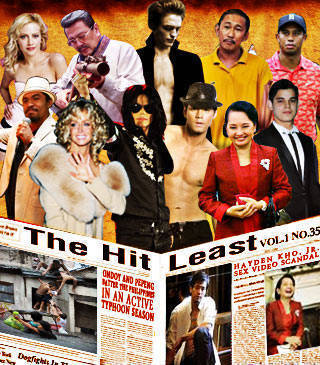 Top 10 Hit Headlines of the Year

A year's worth of Andrew Paredes' juicy commentary on 2009's lowlights.

1. ONDOY AND PEPENG BATTER THE PHILIPPINES IN AN ACTIVE TYPHOON SEASON. There's nothing worse than starring in your own disaster movie.

2.       MANGUDADATU KIN, JOURNALISTS, INNOCENT BYSTANDERS MASSACRED IN MAGUINDANAO ALLEGEDLY OVER POLITICAL RIVALRY. How could things like this happen in 2009? Are they still burning witches up in Salem?

3.       FARRAH FAWCETT, MICHAEL JACKSON, PATRICK SWAYZE, BRITTANY MURPHY BID FAREWELL. First it was a Charlie's Angel. Then the genius who made dancing with zombies cool. Then the hunk who gave us the time of our lives. And finally gawky Tai from Clueless. How much more trauma can one generation take?

4.       HAYDEN KHO, JR. SEX VIDEO SCANDAL BLOWS UP. More than a year later, Hayden allegedly tries to commit suicide a second time. Proving once and for all that there should be no second acts in Philippine lives.

5.       P1 MILLION PESO DINNER IN NEW YORK AND ANOTHER OVERPRICED RESTAURANT MEAL IN U.S. SORTIE EXPOSED. Gloria has now shown beyond a doubt that she can eat beyond her height.

7.       MANNY PACQUIAO CONQUERS HATTON AND COTTO; KNOCKED DOWN BY RUMORS OF MARITAL INFIDELITY. Think of it as karma, Manny, for subjecting us to those annoying Wapakman TV ads.

8.       RICHARD GUTIERREZ SUES PEP FOR LIBEL; IS CHARGED WITH NEGLIGENCE IN CAR MISHAP DEATH OF PRODUCTION ASSISTANT. You know your career is   in trouble when it looks like your legal shenanigans get higher ratings than your acting work.