Robin Tomas, 33, won the Best Reinvention of the Men's T-shirt award at the Supima Design Competition held January 19 in New York City. His winning design will be sold in Bloomingdale's stores all over the U.S. "This is my first time to do a t-shirt. Very exciting, very challenging. I'll never look at a t-shirt the same way again," Tomas said in an interview during the initial model fitting for the competition.

Tomas was one of six finalists in the competition whose work was judged on the basis of originality and execution by representatives from Bloomingdale's, Parsons School of Design, The New York Times and The Wall Street Journal. The finalists presented four pieces: three pieces of women's evening wear and one men's (or unisex) t-shirt, all made from Supima (an abbreviation of Superior Pima) cotton. The t-shirt competition was added after the launch of Supima's unisex t-shirt collection in December. Gina DeSilva, who has her own ready-to-wear label, took home the grand prize for her evening wear designs.

"Fashion is a great mix of entities: fantasy and practical reality; past periods and the unchartered path of what's to come. I see fashion not just as garment being worn, but attitudes enhanced," Tomas told Supima.

Robin Tomas is interviewed during the initial model fitting 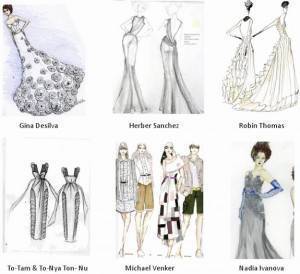 Currently based in New York, Tomas has his own label named after him. In May 2009, he showed his women's wear collection during Philippine Fashion Week. Top designer Rajo Laurel described his collection as "very strong, filled with many pieces that would make any woman swoon!" His mother, actress/comedienne Tessie Tomas, was the one who encouraged him to present his collection in Manila during New York's economic crunch.

A graduate of Parsons School of Design, Tomas worked as a menswear designer for Gap, Tommy Hilfiger and J. Crew. He interned at Valentino and Anna Sui. Before leaving the country for Parsons in 2001, he was an art director at ad agency Saatchi & Saatchi. He graduated from the University of the Philippines with a degree in graphic design.

Read SPOT.ph's exclusive interview with Robin Tomas in May 2009.

Robin Tomas Tessie Tomas Pinoy Win
Your Guide to Thriving in This Strange New World
Staying
In? What to watch, what to eat, and where to shop from home
OR
Heading
Out? What you need to know to stay safe when heading out