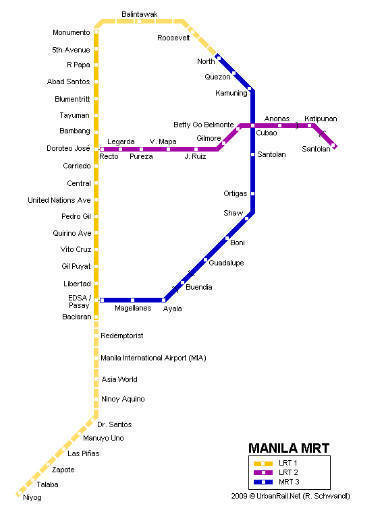 Screencap of MRT-LRT diagram from UrbanRail.Net

The extension, which will be open for commercial use on March 15, Monday, is a way to decongest Metro Manila traffic. According to Pres. Arroyo, "By making it convenient because it's O-shaped, you don't have to go down and take another transport. You can go anywhere and get off anywhere, and you just take the transport for your final destination."

She told the reporters present that the P7.6 billion project would provide commuters a faster, safer, and cheaper alternative in going around Metro Manila. Currently, DM Consunji Inc. and First Balfour Inc. are conducting more tests to ensure the safety of the new stations.

The 90-minute inaugural trip started at the MRT Santolan station where the President, Cabinet officials, and invited reporters were shuttled to from Camp Aguinaldo. The group stopped at North Avenue before transferring to the brand new LRT train. According to the Inquirer, this was due to the different track gauges used by the trains .

On the Philippine Government website, Pres. Arroyo explained that the connection was part of her 10-point agenda called "Beat the Odds" which she had previously discussed in her State of the Nation Address. "Before the Arroyo administration, the capacity was only 400,000. Now it's 1.3 million [daily]." She said that the newly completed loop would "bind the metropolis as never before."

The group stopped for a short inspection of the new Balintawak station, which would cater to commuters coming from the North Luzon Expressway, before heading straight to the LRT Taft Avenue station. President Arroyo then led the party across the foot bridge leading to the MRT Taft Avenue station before riding the train back to their starting point at Santolan.

LRT Authority (LRTA) Administrator Melquiades Robles told the Inquirer, "The spirit behind this is the President. This is the cheapest. This is 100-percent local fund." Pres. Arroyo explained further by saying that the project involved no loans and was fully funded using VAT (value-added tax).

As for further expansions, the Philippine Government website notes that the construction of a P777 million Grand Central Terminal which will connect the MRT3 to future lines such as the MRT 7 is under way.   The Inquirer also reports that the South Expansion project is still in its planning stages.