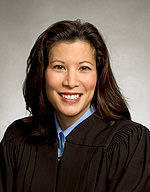 California Gov. Arnold Schwarzenegger has nominated Filipino-American judge Tani Gorre Cantil-Sakauye, 50, as the chief justice of California, reports ABS-CBNNews.com. If elected, she would be the first Asian-American chief justice of the state, and she would replace Chief Justice Ronald M. George, who will retire in January.

MercuryNews.com reports that Sakauye is "something of surprise choice, given that her name has not been circulated much in recent days... But with historic credentials and a long resume as a judge, she is unlikely to encounter much resistance as she goes through the nomination and election process."

Arthur Scotland, the presiding justice of the Third District Court of Appeal, where Sakauye has been a judge since 2005, said, "Everyone that has known Tani has always expected great things of her... She is the complete package." MercuryNews.com reported that Scotland is an influential backer of Sakauye for the chief justice post.

Sakauye, a Republican, said, "Being nominated to serve on the highest court in California is a dream come true. As a jurist, woman and a Filipina, I am extremely grateful for the trust Gov. Schwarzenegger has placed in me."

Sakauye was recently appointed as the head of a Judicial Council committee that oversees the operations of the body that runs the court system, the Administrative Office of the Courts. She had previously served as a judge in the Sacramento court for 14 years.

According to the California Courts website, Sakauye graduated with honors from the University of California, Davis in 1980. She then took a year off to visit the Philippines before entering the Martin Luther King Jr. School of Law at the University of California, Davis. According to MercuryNews.com, working as a blackjack dealer in Lake Tahoe helped her pay her way through law school. She became a judge at 30.

She was born to a Filipina farm worker and a Filipino-Portuguese who worked in sugar cane and pineapple plantations in Hawaii before moving to Sacramento, California, reports ABS-CBNNews.com. She has two daughters with her husband Police Lieutenant Mark Sakauye, according to the California Courts website.

Arnold Schwarzenegger Pinoywin Pinayjudgeincalifornia Tanicantil-sakauye Tanisakauye
Your Guide to Thriving in This Strange New World
Staying
In? What to watch, what to eat, and where to shop from home
OR
Heading
Out? What you need to know to stay safe when heading out