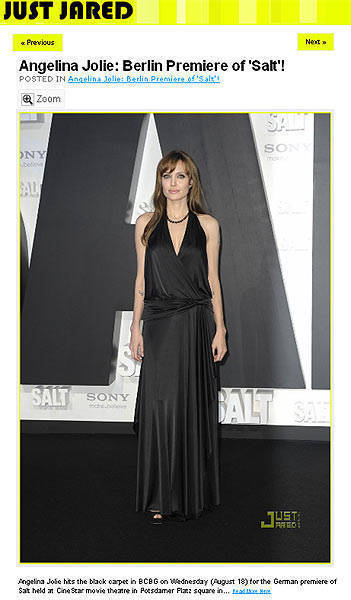 Hollywood superstar Angelina Jolie wore a black draped dress by Pinay designer Pia Gladys Perey to the Berlin premiere of her latest movie Salt on August 18, as featured on JustJared.com. Part of Perey’s Summer 2009 collection, the gown named "Elysia" is "inspired by anti-ageism" and has the designer’s "signature draping inspired by Greek mythology," Perey told SPOT.ph. She added that Jolie’s stylist told her that the actress-humanitarian-mom "loved the dress, and asked for three more black dresses and some more neutrals."

When Perey first found out from her publicist that Jolie was going to wear her creation, she felt like she was "going to give birth," she told FemaleNetwork.com. Her publicist, Jeffrey Lindsay Relf of the Fashion Office, was the one who sent Perey’s lookbook to Jolie through her stylist. Perey told SPOT.ph that she sent seven dresses, including the Elysia gown, to Jolie and will send seven more this week.

Asked what kind of design she would like to personally create for Jolie, Perey told FemaleNetwork.com it would be "’an ivory draped V-neck gown’ with a flowing skirt, similar to the Sienna gown (see gallery below) from her Spring-Summer 2011 collection." She added that she would love to design for Hollywood stars Cate Blanchett, Nicole Kidman, Uma Thurman, Julia Roberts and Sandra Bullock, and local celebrities Ruffa Gutierrez and Charlene Gonzales. 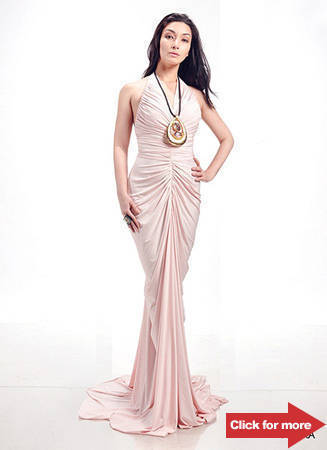 Alexa by Pia Gladys Perey. Click for more photos of the first batch of dresses Perey sent to Angelina Jolie, plus the second batch Perey will send this week.

Perey’s Jolie feat isn’t her first foray into the Hollywood scene. She has worked with Sex and the City stylist Patricia Field, and her 21-piece collection is available in Patricia Field boutiques and on PatriciaField.com. One of her dresses was also recently used for a national billboard promoting David Hasselhoff and his family’s new reality television series. Plus, her publicist is in talks with the stylists of Hollywood celebrities like Cate Blanchett and Lauren Conrad.

According to the information on Perey’s website, the Tagaytay-born designer first burst into the international fashion scene when her label White Kitten was featured in the Rosemount Australian Fashion Week in 2007. In 2009, she partnered up with Texas-based entrepreneur Susan Youngblood, with whom she launched the Pia Gladys Perey line in New York in January 2010.