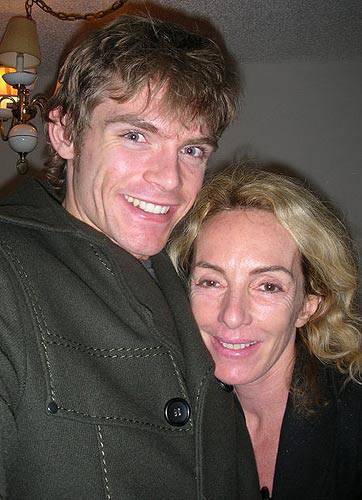 Carole Day and her son Jai. Photo from the "Missing: Carole Day" Facebook page put up by Jai.

Carole Day, a 56-year-old furniture entrepreneur based in Hong Kong, has been missing since September 12 in Manila, reports the South China Morning Post. According to the Facebook page put up by her son Jai, she was last seen by her business partner Tschai Ma unpacking and pricing items at the LRI Design Studio building on Nicanor Garcia Street in Makati. The next day, September 13, Ma and the showroom manager supposedly saw all of Day’s items neatly stacked. "The lights were turned off, and the door was locked. No sign of a struggle," Jai wrote on the Facebook page.

The former long-distance runner and model was in the Philippines to source decorative items for a local hotel in behalf of her company, Ginger Lily, according to the South China Morning Post. She was supposed to fly to Cebu, then to Thailand, and then back to Manila before returning to Hong Kong. However, Jai said, "I’ve been told by immigration that she never left the Philippines."

"My brother and I are very worried. Mum’s the kind of person who would phone you three times a day just to see how you are. When I last spoke to her, she was fine," Jai, who flew to Manila from Los Angeles to look for his mother, told the London Evening Standard. "I’ve been to all the hospitals and there are no unidentified women with her description. She had no reason to go missing. If she’d been kidnapped, (someone would have asked for) a ransom. It’s been nearly two weeks, and I have no idea what might have happened. It’s very frustrating."

Day’s friend and business associate Mina Mahtani told the South China Morning Post that Day would not have missed a close friend’s funeral on September 15 in Hong Kong. She said, "The Philippine vice-consul was very friendly and helpful. After all those murders in Manila, the consulate has made it very clear to the Philippine police that (Carole) is a Hong Kong resident and (her case) should be given top priority." Day is the widow of District Court Judge Richard Day.

For any information, email Jai Day at jaicool@hotmail.com, or send him a text message (0916-4402851). For more on this story, log on to the South China Morning Post, the London Evening Standard and the Facebook page put up by Jai Day.

Carole Day Caroledaymissing
Your Guide to Thriving in This Strange New World
Staying
In? What to watch, what to eat, and where to shop from home
OR
Heading
Out? What you need to know to stay safe when heading out