Models fall down the runway at the Furne One fashion show dubbed the "fall" collection
Loading
Already a member? Log in
No account yet? Create Account
Spot.ph is your one-stop urban lifestyle guide to the best of Manila. 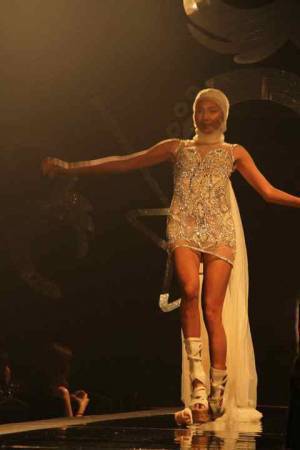 Model about to slip at Furne One show. Photo by Girlie Rodis.

Models fell down the runway as they reportedly slipped on an oil puddle from a fog machine and a water leak on the stage at the Furne One fashion show last night, October 9, at the Makati Shangri-la Hotel ballroom. It is reported that nine models fell flat on their faces and on their behinds a total of 20 times on the runway made of shiny black material. The show was dubbed afterwards by guests literally as the "fall" collection. A spectator commented that the "falls" in One’s show, in terms of extent and frequency, topped the ones that occurred at  Randy Ortiz’s fashion show in 2008 where even the show’s finale star Bea Alonzo plus other models also fell down the runway as they slipped on the runway with a similar shiny black surface. 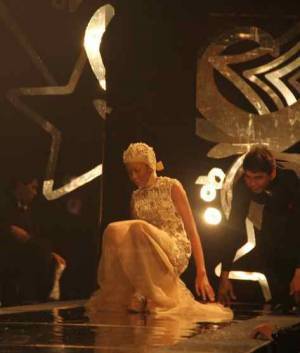 Model slips, assisted by a guest. Photo by Girlie Rodis.

Maintenance persons reportedly tried to wipe the puddle from the leak, which only exacerbated the problem as the slippery surface only spread wider across the floor. More than halfway through the show, models were instructed by director Ariel Lozada to remove their shoes and walk barefoot instead, but some of them still fell down, tripping on their gowns.

However, says veteran model Marina Benipayo who closed the show for the acclaimed finale, "It wasn’t the shoes that were the problem, but the slippery surface." She says that despite the order to remove the high heeled strappy boots that came with her couture corset masterpiece, she refused to do so, because "it wouldn’t be Furne One anymore without the boots," adding, "even if I did fall down while wearing the boots, I wouldn’t have been the first one to have done so for the show," referring to all the girls who had already fallen down before she did. Benipayo, who has been modelling for two decades and has worked with countless fashion designers in the country, told Spot.ph that the One’s creations were so breathtaking, she said "Wow!" twenty times during her fitting. She said the cape she wore was "three meters wide, five meters long and about 50 kilos! I Couldn’t carry or wave it. I felt like I was tugging a cape with a guy riding on it!" 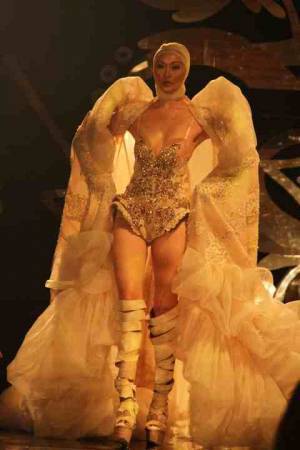 The show must go on: True professional Marina Benipayo. Photo by Girlie Rodis.

The show, called "First of One-A Fashion Collection by Furne One" neverthless got rave reviews from guests, designers and magazine editors. Tweeted Tim Yap, who was an auctioneer at the Red Cross benefit show, "Must say that the clothes of Furne One were exquisite pieces. And aside from the "fall" collection part, those were wow masterpieces!" Fellow Cebu designer Oj Hofer Tweeted "fantastic experience watching Furne One’s show. Tweeted Rajo Laurel, "Bravo!!! Furne One!!! Amazing show!!!!"

Stylebible.ph managing editor Isha Andaya also called One’s collection "amazing." She said, "The detail work is so intricate and he is quite ingenious with his use of materials. [His creations] are even more amazing up close--you can really see the handiwork." Preview editor-in-chief Pauline Suaco said, "Furne’s clothes were impeccably constructed and finished. The genius was in the details--he married old school haute couture embroidery and embellishment with sculptural shapes--and the effect was really a feast for the eyes." Of all the falling down that happened in the show, she said, "The organizers last night said the slips were caused by dripping water and some oil on the runway. This underlines the importance of a technical dress rehearsal."

One, who started his career in Cebu, has been Dubai-based for over a decade, where his collections have been featured in Harper’s Bazaar Arabia. He also joined the recent London Fashion Week in September 2010. In 2009 he was chosen by Heidi Klum as the featured designer for the finals of Germany’s Top Model. That year, he also won the Designer’s Choice Award at the Miami Fashion Week.


Co-chair (along with Tessa Prieto Valdes) of the show’s beneficiary, The Philippine National Red Cross, Kaye Tinga Tweeted, "Furne One’s clothes were sooooo beautiful, hope the falling models didn’t detract from it. Models were so graceful despite the mishaps." Jewelry designer Janina Dizon Tweeted, "Super loved the shoes and accessories of Furne One! Is it true that gowns start at 10000 usd? Kinda painful to watch models slipping though."

Watch for the photo gallery of guests and One’s collection tomorrow in Spot.ph.

Furne One Fallcollection Modelsfall
Your Guide to Thriving in This Strange New World
Staying
In? What to watch, what to eat, and where to shop from home
OR
Heading
Out? What you need to know to stay safe when heading out