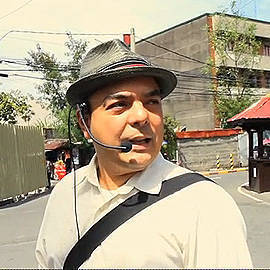 Why You Do What You Do: Carlos Celdran

Still can’t get enough of the "Damaso" Dissenter? Find out why "all the world’s a stage" for Carlos Celdran.

This week on Why You Do What You Do, we probe into the forces that drive the man dubbed as the "modern-day Jose Rizal," Carlos Celdran. The performance artist, Manila walking tour guide, and activist has earned both cheers and jeers for his protest against the Church’s meddling in the government’s stand on Reproductive Health on September 30. The best-known advocate of the Reproductive Health Bill (RH Bill), Celdran was jailed after he stood in front of the altar during an ecumenical service at Manila Cathedral while holding a placard that read "Damaso" (referring to the abusive friar in Rizal’s Noli Me Tangere) and said, "Stop getting involved in politics!"

"When we were coming up with our list of people whom we wanted to feature, we all agreed we had to feature Carlos Celdran since he was famous for his walking tours," says producer Julo de Guzman. According to director Nicky Daez, Celdran’s episode was one of their easiest shoots: "He just has such a great presence and his charisma translates so well on camera. He was definitely entertaining even off-cam." Daez says Celdran’s passion is his vocation. "There’s a discipline to it and at the same time, he constantly tries to make it evolve and improve it as well. There’s something so special about this because it makes his craft so soulful and you can see it in his tours. He pours everything he has into it day in and day out."

About Celdran’s recent controversy, cinematographer Marco Limjap says, "Of course, I agree with Carlos. times are changing fast and if we do not act quickly to show our concerns, nothing will be solved. Carlos Celdran shook the ground and made everyone notice an unheard or avoided voice. Sharing an opinion is caring about the present situation." De Guzman adds, "To disagree with the Church doesn’t mean you are morally wrong. It just goes to show that times are changing and that there are certain measures that can still be morally right for the good of society. Such is the case for this one."

Watch the video to get snippets of Celdran’s life, passion, and vocation.

Read "On The Spot: Carlos Celdran."

Read "Why You Do What You do: Rhett Eala."

Video: Why You Do What You Do: Carlos Celdran Wyd Carlosceldran Damasa
Your Guide to Thriving in This Strange New World
Staying
In? What to watch, what to eat, and where to shop from home
OR
Heading
Out? What you need to know to stay safe when heading out