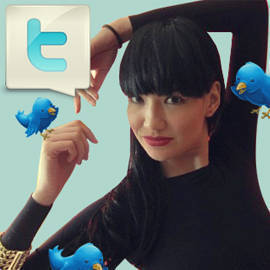 Ornusa on the models who slipped at the Furne One show, Liz Uy on getting hospitalized, Carlos Celdran on his Hawaii trip and Solita Monsod and more.

Ornusa Cadness, model:
- applause for all the models at furne one show last night who slipped, but still got up. when will they learn to stop polishing the stage??

Liz Uy, Presidential stylist currently being linked to P-Noy:
- John Mayer I love your tiny guitar your curls your tattoos your face your lips your big hands the way you sing. And the sax guy! Haha
- Not inventing,swear john mayer looked at me for 5 seconds while singing half of my heart and smiled.have witnesses @solennheussaff @VJcliffy
- I’m so sick! :( :( :(
- Food poisoning. Or maybe I ate too much? :( :(
- I’m confined. ;( ;( ;( I really don’t like hospys!  :( :( :(
- I’m better na but they won’t discharge me yet. Thank you for your prayers. <3

Georgina Wilson, model and VJ:
- I hate how mean the buses are on the road â˜¹ they’re such bullies on the road. Such dangerous drivers!!

Carlos Celdran, performance artist and Manila tour guide:
- hopes that this does not come across as a racist statement: BUT JEEZ man, it’s just appalling how much food Americans waste. It’s a sin. It’s a crime. And I really wish they would stop it.
- My favorite part of Noli Me Tangere: The Tsokolate Eh.
- is recommending that we all re-read Noli Me Tangere and El Filibusterismo. But which translation would be the best?
- says this woman makes me proud to have attended University of the Philippines Diliman. Rock on, Professor Monsod.... http://fb.me/LrdmPGMq
- is posting vacation pictures. There are so many similarities between Honolulu & Manila. And many things we can learn too. How cool would it be if we could row down the Pasig River the way they do at the Ala Wai Canal?
- is telling you that if you have never visited Intramuros. Now is the time to do it more than ever before.

Gang Badoy, RockEd founder:
- Spent the afternn w. my Mom. Asked if she wanted to eat at the restaurant called ’Damaso’ in GBelt5, she said no. Hihihi.
- When I tweeted abt the bday of the "Man from Manila." (meaning Francis M.) someone SMS’d me, "Bday ni @carlosceldran?" Toingk.
- I got Teachers’ Day letters from my students in jail. Those letters should be on my top ten things to save in case of a fire.
- That Winnie Monsod lecture is the 3rd best video of hers. The 2nd was her C5 explanation & the best was the MikeyArroyo intvw w/ Clavio. :)

Pepe Diokno, filmmaker and writer:
- Not only wr my taxes used 2 name Carlo Caparas Nat’l Artist;they wr also usd 2 pay him P1.3 BILLION. I feel so violatedhttp://bit.ly/dCC4EC
- Sorry, but how can you avoid fixers when the system is broken? Government, again you make it hard for a law-abiding citizen to be one.
- Maybe one day Ill do an homage to the first film that made me cry: "Bambi"

Jim Paredes, singer and songwriter:
- When Ex health sec dr. Juan Flavier championed RH years ago, the church accused him of being an abortionist.
- My advice to PNoy for next 100 days. More time with Shalani. A man needs a woman’s advice, wisdom and calming effect, di ba?
-  Revised saying that women who marry powerful men can relate to: ’Behind every great man is a woman...who thinks he’s an idiot.’
- I don’t care how rich China is. If they have a Nobel peace prize winner in jail, it is short of being a great country.
- China’s democratization will HAVE to happen someday soon. In a world of technological interconnection, it is inevitable

Tweets Of The Week Celebritytweets Carlosceldran Gang Badoy
Your Guide to Thriving in This Strange New World
Staying
In? What to watch, what to eat, and where to shop from home
OR
Heading
Out? What you need to know to stay safe when heading out