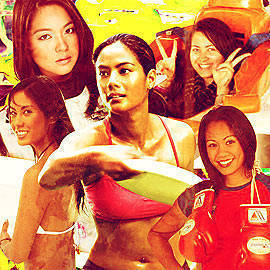 Here's our list of Pinay athletes who have the X-factor. 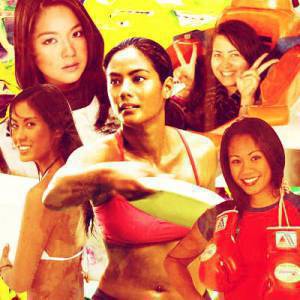 Women in sports have fought and worked hard to be where they are. That alone already makes them hot. Then again, there are female athletes who are undoubtedly easy on the eyes. SPOT.ph lists the hottest Pinay athletes--from sports advocates to professional players.

What’s sexier than a woman who’s a champ in such a macho sport? Nicknamed "The Hurricane," the dusky and charming Julaton is a World Boxing Organization (WBO) and International Boxing Association (IBA) champion in the female super bantamweight division. In fact, she’s the first female Filipino-American to pull off such a feat. Though she’s an American on paper, Julaton is still proudly Pinay.

The svelte and gloriously tanned Lapus is the first Filipina to be certified as a surfing instructor in the country. There’s no doubt that this lady can ride the waves. Plus, she looks good enough to be in a Cream Silk ad. Truth be told, her hair is the last thing we notice. Her almond-shaped eyes alone are already showstoppers.

Chanco has made her mark as a sporty newswoman. She’s a member of the Ultimate Frisbee National Team and a certified trainer. It doesn’t hurt that she has a camera-ready face. 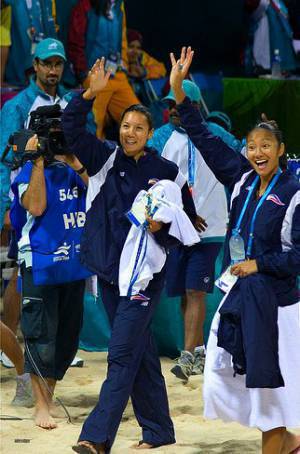 Both 5’10," these certified beach babes could easily have been models. They are both touring pros in the Association of Volleyball Professional beach volleyball circuit playing with separate partners. Ilustre and Pascua both grew up in the US, but they representend the Philippines in the 2005 SEA Games, where they won the bronze medal for women’s beach volleyball.

Danica Patrick should check her rear view mirror from time to time. It may only be a matter of time before Filipino-German Bumgarner overtakes her as auto racing’s sweetheart. Coached by former world karting champion Terry Fullerton, Bumgarner was named the Overall Champion in the Asian Karting Zone Championship (Open Class) in 2004. At 19, she earned the distinction of being compared to Patrick after she became the first female to win the Rock Island, Illinois Grand Prix in 2008.

Fans of this chinita stunner, who is hailed as one of the best female volleyball players in the University Athletic Association of the Philippines, should be thankful for her loyalty to Far Eastern University. If not playing for the Lady Tamaraws in the UAAP and the Shakey's V-League, the 22-year-old could have migrated to Germany with the rest of her family. Hopefully, she pursues her dream of joining the Philippine national team.

Loraine, who grew up in Guam, playing pool in 2000 at the University of Central Florida. She played there for four years and was coached by world ranked professional pool player, Charlie Williams. She first played in the country last year at the JBETpoker.net Women's World 10-Ball Championship. She again played here during the World Mixed Doubles Classic and was paired with Lee-Van Cortez. They grabbed the third place. It goes without saying that Loraine is an accomplished pool player--who just happens to look like a sultry movie star.

Not a lot of women can get away with not putting on makeup, but this racing goddess certainly can. Of course, she kicks ass when she’s behind the wheel. She finished third-place overall in the 2004 Philippine F3 Toyota Championship and earned a scholarship from Formula BMW Asia. On top of that, Dela Merced also played a sexy assassin in ABS-CBN’s primetime telenovela Kung Tayo’y Magkakalayo.

She may look like the basketball team muse, but Brick can easily play with the boys--and even beat them. Brick was accidentally discovered by Samahang Basketbol ng Pilipinas (SBP) executive director Patrick Gregorio, who was then searching the US NCAA website back in 2007. Gregorio was hoping to find a Filipino-American talent in any of the Division I schools. Gregoio came across Brick's photo and read her brief bio. Gregorio noted that Brick loved pancit canton. The long-time SBP official knew that Brick was part-Filipino. Brick helped the Philippines to the silver in the 2007 Southeast Asian Basketball Association women's championship and a bronze medal finish in the SEA Games that same year.

Their landmark gold medal wins in two prestigious tournaments in 2009--World Poomsae Championship in Cairo, Egypt and the 25th Southeast Asian (SEA) Games in Vientiane, Laos--made the trio the darlings in Philippine sports. The three cousins grew up together and took up taekwondo at almost at the same time. Lagman is a certified nurse, Ortega is taking up her Master of Arts in Sports Science, and Alarilla just finished her business degree at Ateneo. They’re pretty, they’re smart, and they’re most likely stronger than most men. You can’t blame us if we placed all three on them on top of the list, can you?