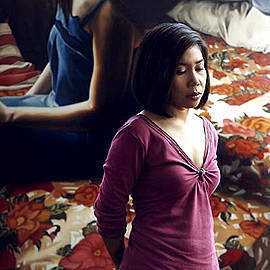 No "starving artists" on this list-whoever thought of that oxymoron should have thought twice before coining the term. Raking in the big bucks in the art world is no easy feat, hence we pay tribute to the brave few who persevered at creating art and made loads of money along the way. SPOT.ph listed 10 of the most successful local visual artists of today who have landed on their feet in the international art scene, and in doing so, inspire so-called struggling artists to keep the faith. 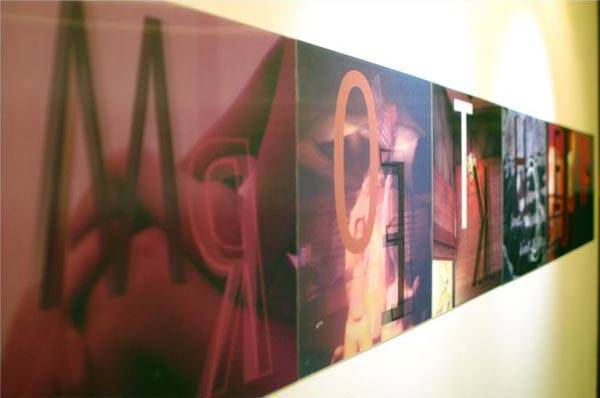 The artist: There is something innately moving about Nikki Luna's work. The UP fine arts graduate is known for her part-installation, part-sculpture show, The Heartless Insistence of Domestic Absence. Among the most noteworthy in the series were My Name is Not Mom, an installation piece that uses old children's clothes , and Mother Fucker, a mixed media artwork that combines photographs and holograms. Luna's bold works are, without a doubt, celebrations of femininity and expression.

The big bucks: She recently participated in the Modern and Contemporary Southeast Asian Paintings Spring Sale at Sotheby's Hong Kong and Luna’s Unmentionables was auctioned off for HKD93,750--more than double the selling price. 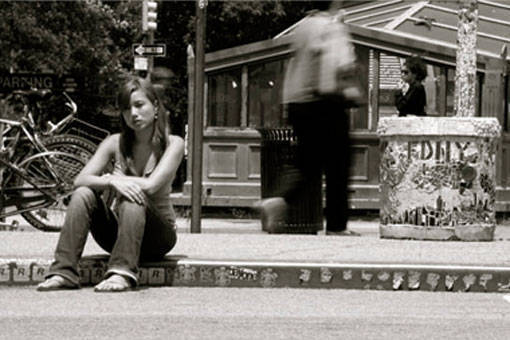 In 2008, Luna (above) was accepted at the Cooper Union Summer Residency in New York

Claim to fame: Breaking into the international art scene early this year with a monumental sale at Sotheby's  reinforces Luna's place in the global market.

Exhibits and awards: Luna has participated in over 10 group exhibitions and four solo shows to date. 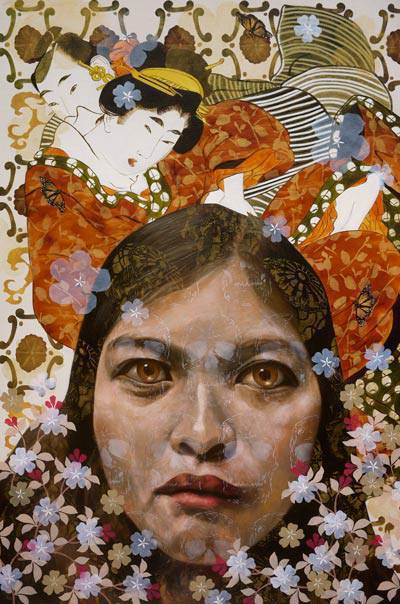 The artist: Striking, arresting, and sometimes distorted faces is what Barrioquinto has become known for. Born in 1975, the University of Santo Tomas painting major has been labeled as the "Dark Man of Philippine Art."

The big bucks: Skulls and Butterflies is a 7X5 oil-on-canvas masterpiece that sold for HKD620,000--over 15 times its estimated price. 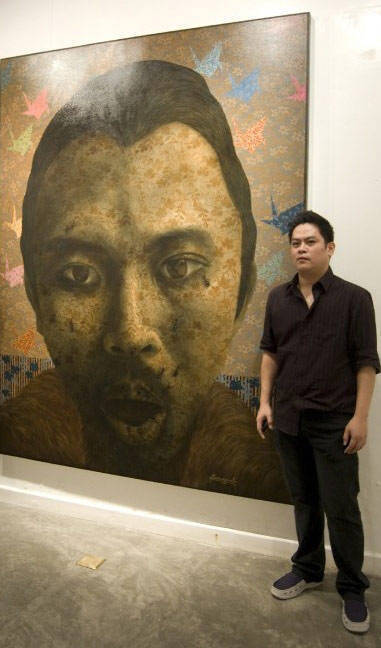 The artist with one of his signature face-themed pieces

Claim to fame: This creative genius has participated in shows in Singapore and Taipei. He also happens to be the son of journalist Cesar Barrioquinto.

Exhibits and Awards: Barrioquinto has won numerous awards, including the grand prize of the Metrobank Foundation Painting Competition, two Benavidez Awards from the University of Santo Tomas, and an Honorable Mention at the 9th Taiwan International Biennial Print and Drawing Exhibition. 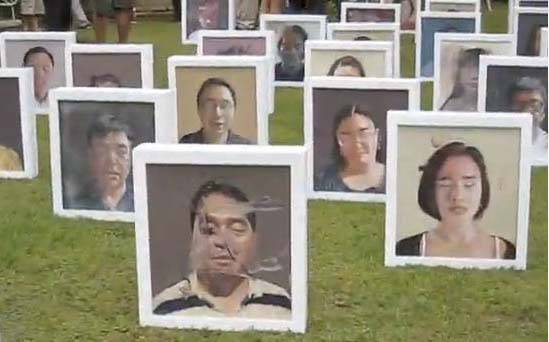 The artist: Born to a family of artists, Winner Jumalon is a product of the College of Fine Arts of the University of the Philippines. His exhibit, A Part, featured portraits of a hundred or so art collectors, and earned him rave reviews.

The big bucks: In a Sotheby's auction, the young artist's Face of Man painting sold for over $23,400-almost 10 times its original estimate, while an untitled oil-on-canvas piece earned him SGD24,000 at the Masterpiece Auction in Singapore.

Claim to fame: The 26-year old visual artist has exhibited in galleries all over the world, including Singapore, Taipei, Malaysia, Miami, Thailand and UAE. 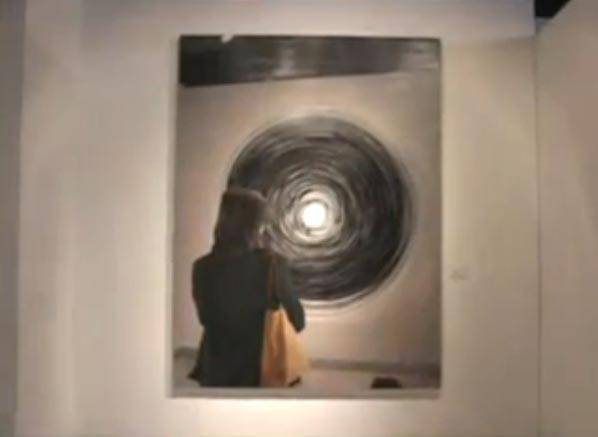 The artist: Born in 1971, Annie Cabigting majored in painting at the University of the Philippines. She views her craft as means to carry on the work of artists who have inspired her. Her piece After Yves Klein was auctioned off in this year's ManilArt. 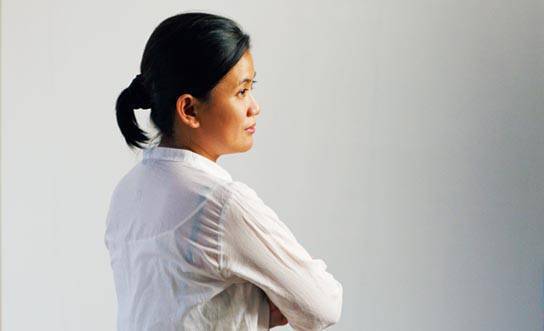 Claim to fame: This international auction house favorite has graced the art scene in Malaysia, Milan and Switzerland, and has participated in the Prague Biennale, Czechoslovakia.

Exhibits and awards: In 2005, Cabigting was a recipient of the Ateneo Art Awards. To date, she has participated in over eight group exhibitions and four solo exhibitions.

In 2006, Cabigting’s Navel was part of the Girls Will Not Be Girls exhibition at the Art Center in Megamall with Nona Garcia and Geraldine Javier, among others 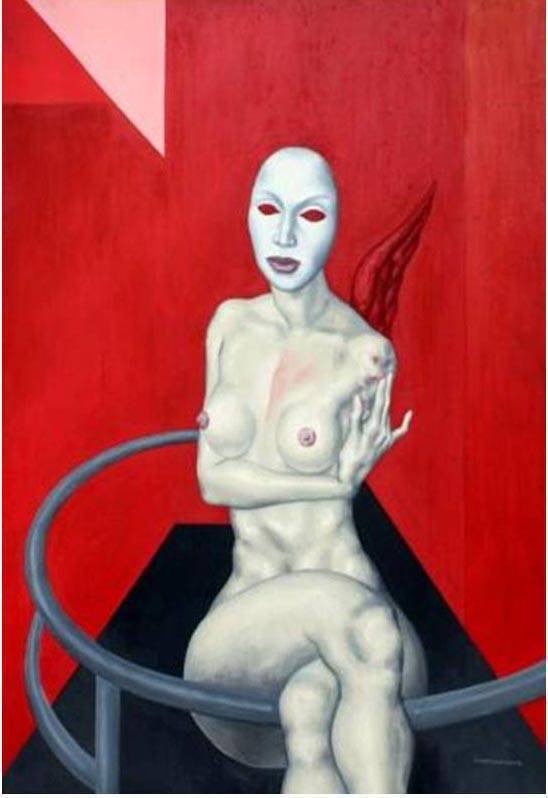 The artist: Escora is among the most well-known figures in the local art scene. Born in 1970, his work is often described as figurative and sometimes provocative. When he's not busy painting, he creates another form of art as a DJ.

The big bucks: Escoras are not only hot in Manila (his works average around PHP70,000 a piece), they're sought-after abroad too. Hair Face sold for HKD62,500, and an untitled piece sold for HKD87,500 at a Christie's auction. His charcoal-on-paper work entitled Faith also earned him  HKD81,250. 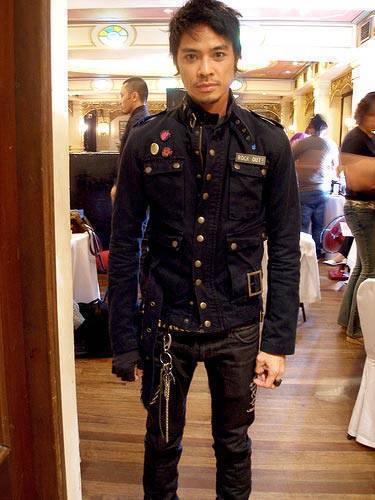 When he’s not painting, visual artist Kiko Escora dabbles in music as a DJ

Claim to fame: He has taken part in various solo and group exhibitions in Singapore, Malaysia, Thailand, Korea and Indonesia. Escora has also joined a number of art fairs in Singapore, Hong Kong, Miami, Dubai, New York and Beijing.

Exhibits and awards: This Cultural Center of the Philippines Thirteen Artists Awardee has done over 20 solo exhibits and participated in over 30 group shows. 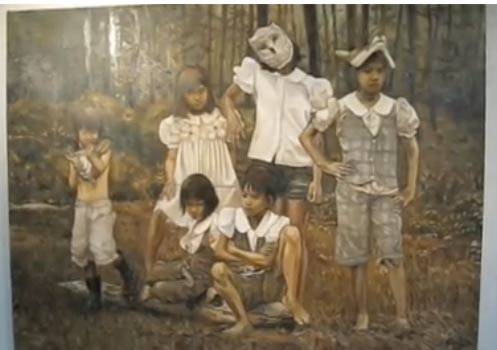 Sison-Ching’s Delicate Earthquake, featured in her solo exhibit Into the Woods

The big bucks: In 2008, her oil-on-canvas painting, Bound, had a HKD137,500 price tag at a Christie's auction. Earlier this year, The Confrontation, a painting of a little girl in a pretty dress wearing a mask, fetched HKD75,000.

Claim to fame: A fixture in the local art scene since the mid-90s, Sison-Ching's works has made her well known in galleries in Singapore, Belgium, and Malaysia. Her pieces are sought after by local and foreign collectors alike.

Exhibitions and awards: In 2007, Sison-Ching was short-listed in the Ateneo Arts Awards, and in 2006, she was the recipient of the Cultural Center of the Philippines Thirteen Artists Award. The Cavite-based artist has had more than 50 exhibits to her name.

Sison-Ching’s Into the Woods exhibit held in October 2009. Video from manila art blogger. 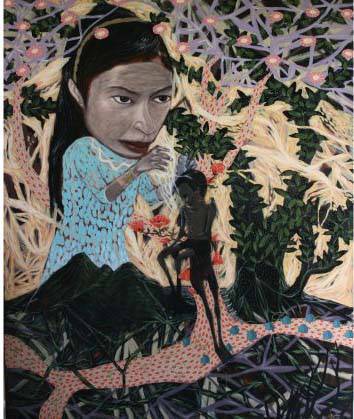 The artist: In high school, Tapaya won art contests for his Alma Mater. Later on, he pursued a degree in fine arts at the University of the Philippines. After bagging the grand prize for the Nokia Art Awards in 2001, he was sent to the Parsons School of Design in New York, and the University of Art and Design in Helsinki to further his studies.

The big bucks: At Sotheby’s Modern and Contemporary Southeast Asian Paintings auction, Tapaya's The Wedding raked in HKD220,000 while his Donsadat And The Magic Dog sold for HKD90,000. At a similar Christie's auction, his acrylic-on-canvas piece, The Banquet hit HKD137,500. At a Borobudur Auction, The Giant Watermelon sold for SGD33,600-that's a little over a million pesos. 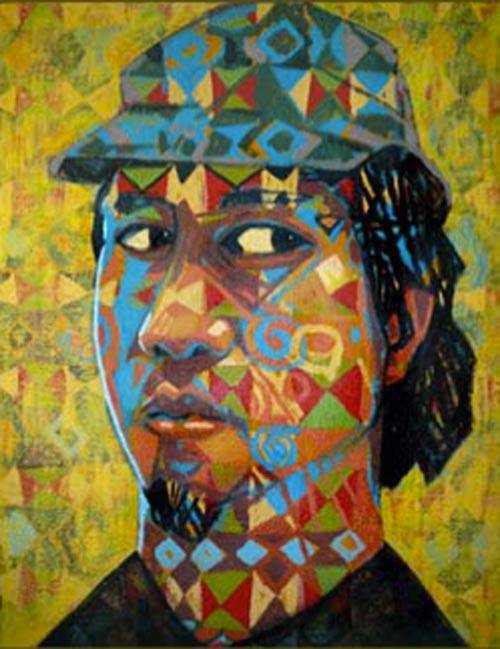 A self-portrait by the artist

Claim to fame: Tapaya remains a favorite at Southeast Asian auction houses where his work sells at admirable rates. Beijing, Singapore, Bangkok and Jakarta are among the countries where his masterpieces have been shown.

Exhibits and awards: He's been short-listed twice for the Ateneo Arts Awards, and he was a semi-finalist of the Metrobank Young Painters' Annual Art Competition. Tapaya also scored first place at the Shell National Students Art Competition and won the grand prize at the Nokia Art Awards Asia Pacific. 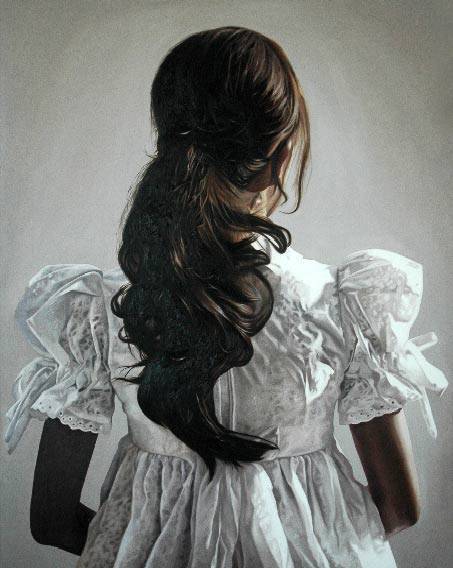 The artist: Born to doctor parents, this 32-year old artist uses photographs as a reference for her art, and they have been popular for imbibing a surrealist feel. Emptiness and isolation are among the concepts that are clearly felt and seen in her pieces.

The big bucks: Garcia's Sitting Still was the breakthrough piece that earned this young artist a slot in the international art scene. It sold for $27, 728 at Christie's Modern and Contemporary Southeast Asian Art auction in 2007. At Sotheby's Hong Kong, the gavel went down at HKD437,500 for Dialogue and HKD976,500 for In the Garden.

Claim to fame: The University of the Philippines fine arts graduate has done shows in Singapore, Kuala Lumpur, Australia, Korea, plus a solo show in Kitakyushu, Japan.

Exhibits and awards: Garcia was a recipient of the Cultural Center of the Philippines' Thirteen Artists Award and was short-listed twice in the Ateneo Art Awards. In 2000, not only was she the youngest artist in the Philip Morris Asean Awards, she was also the only female participant to win the grand prize.

Javier’s oil-on-canvas, Ella Amo' Apasionadamente y Fue Correspondida, set a record for the artist when it sold for HK$1,460,000

The artist: Film and photography make up this artist's repertoire. Javier, who studied nursing before becoming a full-time artist, was trained under the influential Roberto Chabet at the University of the Philippines. Her pieces are oft described as enigmatic and sophisticated.

The big bucks: Ella Amo' Apasionadamente y Fue Correspondida (For She Loved Fiercely, And She is Well Loved), a portrait of Mexican artist Frida Kahlo painted in oil-on-canvas, recently set a new auction record for the artist at HK$1,460,000--nearly 10 times more than the original estimate. The Absurdity of Being, which had a pre-sale estimate of $2,300 was sold 16 times more at $36,971 while her diptych Curating the Sky sold for $93,665. 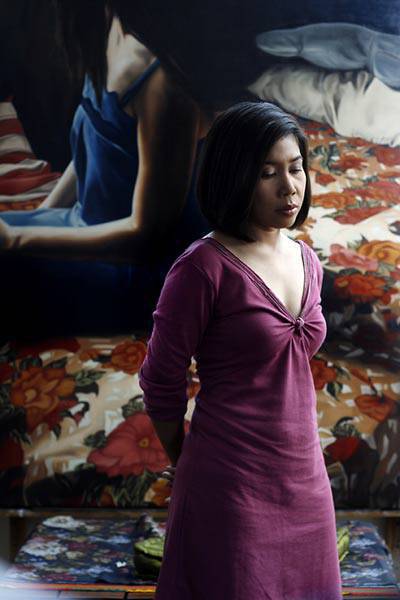 The artist’s portrait, photo by At Maculangan

Claim to fame: Sometimes described as dark, Javier's work has captured the international audience with consistently sold-out shows. Since 2004, she has been exhibiting her work globally in Milan, Malaysia, Prague and Beijing.

Exhibits and awards: Javier has bagged top art awards including the Cultural Center of the Philippines' Thirteen Artists Award and the Ateneo Art Awards. 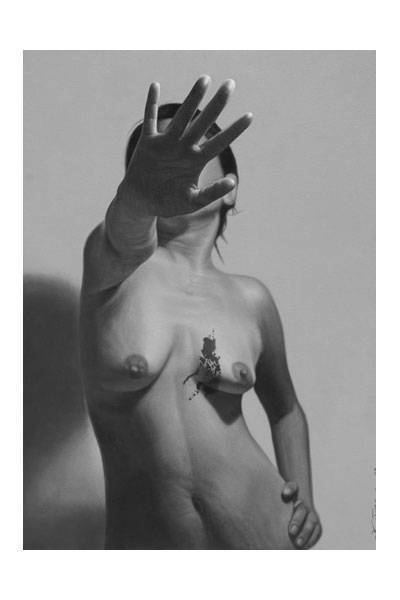 The artist: Striking and odd are two adjectives that come to mind when describing the work of this University of Santo Tomas fine arts graduate. Ventura's masterpieces, often mistaken for the digital sort, make use of classic techniques done just by hand. The result? Strangely interesting artworks that can’t help being original.

The big bucks: Venturas have been selling for five to six dollar digits. The painting Natural Lies recently fetched USD326,000--nine times its estimate-and set a new record for both the artist and the auction house. Uncalculated Flight, sold at SGD 24,000, while the acrylic and oil-on-canvas, Depth, raked in HKD137,500. Ventura is the top-selling Filipino artist of today.

Claim to fame: The international art world has embraced the art of Ronald Ventura as a fixture in top global auction houses Sotheby's and Christie's, where his works sell at skyrocketing prices. Ventura has also done exhibits worldwide, including Indonesia, Singapore, Japan, Taiwan, Vietnam, San Francisco and New York.

Exhibits and awards: The 37-year old artist has won more than 10 awards including the Ateneo Art Awards in 2005, The Cultural Center of the Philippines' Thirteen Artists Award, Art Manila Newspaper's Artist of the year in 2001, and Juror's Choice Award for the Philip Morris Philippine Art Awards.

Ronald Ventura Yasminsison-ching Nikkiluna Geraldinejavier Rodeltapaya Nonagarcia Kikoescora Anniecabigting Winnerjumalon Andresbarrioquinto Young Artists Nsfw
Your Guide to Thriving in This Strange New World
Staying
In? What to watch, what to eat, and where to shop from home
OR
Heading
Out? What you need to know to stay safe when heading out