Tweets of the Week: Liz Uy, Aubrey Miles, Kris Aquino + more
Loading
Already a member? Log in
No account yet? Create Account
Spot.ph is your one-stop urban lifestyle guide to the best of Manila. 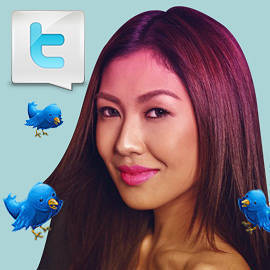 Liz Uy on love and goodbyes, Aubrey on her Twitter haters, Kris on independence, and more!

Liz Uy, Presidential stylist:
- Excited for thanksgiving dinner tonight with friends! ♥ you, what are you thankful for?
-
What you do defines who you are OR who you are defines what you do.
-
Be yourself. Especially, do not feign affection. Neither be cynical about love; for in the face of all aridity and disenchantment...
-
...it is as perennial as the grass.
-
This is our last goodbye,I hate to feel the love between us die,But it’s over, Just hear this and then I’ll go,You gave me more to live for

Kris Aquino, TV host and actress:
- Learning a lot from being on my own. I thrive when I have my independence but I need the responsibility of caring for my 2 sons to keep me grounded. I love new challenges & I can now just relax & release when I see that some things & some people aren’t for me. I’ve learned the hard way that life can be easy- it’s just a matter of our choices.

Bianca Gonzalez, TV host:
-i hate this. north korea and south korea striking each other. NO TO WAR, please!
- i hate this. i guess christmas season traffic has officially begun. it is seriously driving everyone crazy!
- i have my ten lucky pick lotto tickets in hand! 600M is just insane! good luck to us all!!!! :)
- hmm.. i’m getting scared with how huge the lotto jackpot is! i hope no hocus pocus happens!
- happy thanksgiving!!!! not everything goes the way we want it to, but there is so, so, so much to be thankful for. ♥
- i’m with mariel right now!!!! after sooo long!!!! we just keep shouting and laughing!!!! sooo happy!!!! :)
- for those asking, mariel is doing great! she’s very happy, she’ll be back to work soon after a couple of meetings! she’s super blooming! :)

Rhian Ramos, actress:
- Random thought.. I hope some person who bought just one ticket wins the lotto.. It’d be nice to believe in fate

James Jimenez, Comelec Spokesperson:
- just when I realized I dint have any Korean friends, the Northeners pick a fight. I don’t know how that wld be ironic, but it feels like it.
- Maybe I’ll make friends with a korean here. The smoke suckers make the place look like an alien nursery tho. LOL http://plixi.com/p/58826378
- no one really wants a war. and even the belligerent ones are counting on the "good" guys to step away from the brink if it comes to that.
- bullies know they can get away with all sorts of crap coz the good guys are bound by their self-appointed rules of conduct not to push back.
- i feel like the clash between theists and atheists is (a) escalating and (b) apparently ignoring theist faiths other than christianity.
- I used to have trouble differentiating steve martin from #LeslieNielsen. No it’s easier. One’s dead, the other isn’t.

Carlos Celdran, performance artist and Manila tour guide:
- is more of a Rizal dude than a Bonifacian but nevertheless, HAPPY BIRTHDAY Andy! Read up on his life here. http://fb.me/PteZcgpU
- thinks Manila must be perhaps the most romantic city in the world. It seems everyone on the street is pregnant.

Quark Henares, singer and filmmaker:
- you know, now that the LOTTO pot’s the highest it’s been ever, i’m starting to believe the rumors that GMA used to steal from the LOTTO.
- Ok I’m watching ely buendia and raimund marasigan do saturn return onstage.I did not expect to see such perfection today.

Tweets Of The Week Celebritytweets Anne Curtis Elybuendia Krisaquino
Your Guide to Thriving in This Strange New World
Staying
In? What to watch, what to eat, and where to shop from home
OR
Heading
Out? What you need to know to stay safe when heading out