Martinez told PhilStar.com that they checked three possible venues in the country but found "no football stadium acceptable" to the Asean Football Federation (AFF). One of these venues, the Panaad Stadium in Bacolod, only has 500 luminous lights-less than half of the 1,200 FIFA standard, he said. 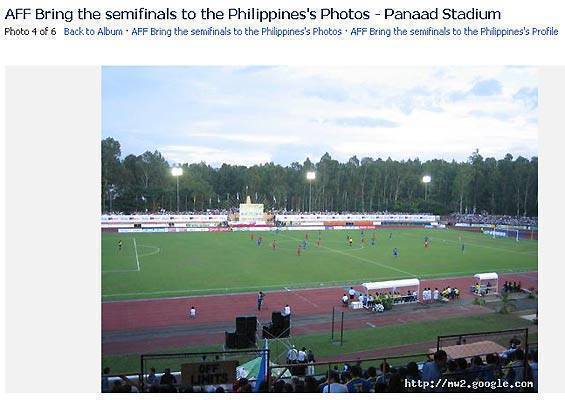 Panaad Stadium in Bacolod. Screencap from the "AFF Bring the semifinals to the Philippines" Facebook page.

PhilStar.com quoted Araneta as saying, "(The Philippine Olympic Committee Chairman Monico) Puentevella has announced he is ready to arrange the installation of the required lights in Panaad. Charlie Cojuangco, who heads the Negros Occidental Football Association, told me he will do his share in the effort to host one of the semi-final matches in Bacolod. Unfortunately, Mari has decided to give up our hosting rights and there is really nothing anybody can do about it."

The Philippines had the choice to hold the home game in a neutral country but Martinez insisted on Jakarta. He told PhilStar.com, "I don't think a neutral country will be able to generate a crowd bigger than what Jakarta can. I don't want our team to miss out on the experience of playing before 40,000 to 80,000 fans. I'm also thinking about the gate receipts. So I've decided as PFF president, to give Jakarta the right to host both our semi-final matches."

Match highlights: The Philippine team advances to the semi-final round of the AFF Suzuki Cup after forcing a scoreless draw against Myanmar on December 8.

PFF Secretary General Chito Manuel sent a formal request regarding VFF’s offer to the AFF today. Olivares blogged the AFF’s response: "I would like to inform you that all procedures (letter to the AFC, logistics, marketing and TV production) have been implemented toward Jakarta (Bung Karno stadium) for 16 December, 2010, therefore we cannot accede to your appeal."

The national team leaves for Jakarta on December 13, according to Olivares. The semi-final matches will be held on December 16 and 19.

For more on this story, log on to PhilStar.com and Bleachers’ Brew.