McMenemy’s contract expired in November but it was extended until the end of December, team manager Dan Palami told GMANews.tv. "I was the one who was paying him... I already asked him before to work on his license."

Of the new coach, Araneta said, "He has coached in China, Japan, and countries in Africa." Weiss will arrive in the Philippines on January 16. 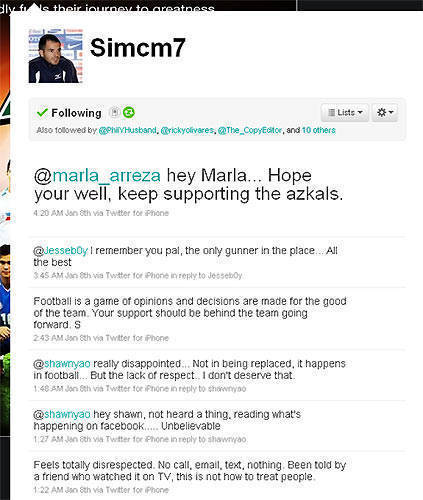 The past weekend, McMenemy Tweeted, "(I feel) totally disrespected. No call, email, text, nothing. Been told by a friend who watched it on TV, this is not how to treat people." He clarified that he wasn’t disappointed that he was replaced because "it happens in football." But he said, "I don’t deserve... the lack of respect."

In response, Palami told GMANews.tv that at the time, the decision to replace McMenemy was not yet formal. "He should have confirmed it with me first. He posted comments on his Twitter account, so I just reacted to them."

FIFA executive Cristy Ramos told GMANews.tv, "The timing is very bad. Between now and February 9 (the AFC Challenge Cup match), I think the adjustment period will play a big role in the success of the Azkals... Like the old saying, if it ain’t broke, don’t fix it."

Ramos added that the team should have retained McMenemy as a member of the coaching staff, but Palami said this will result in a "clash of ideas." He noted that McMenemy himself was hired three weeks before the Suzuki Cup, so he believes the Azkals and the new coach can establish a good relationship before the AFC Challenge Cup.