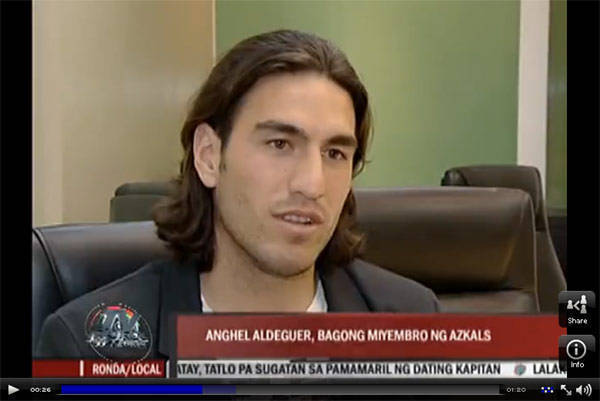 When asked if he had plans of joining local showbiz, new Filipino-Spanish Azkals player Angel Aldeguer told ABS-CBN News through his interpreter, "I like showbiz at home so I think I’ll be ready for that."

Aldeguer, 26 years old and 6’3 tall, plays for the Spanish Third Division Club Deportivo Ronda, according to Malaya. His mother hails from Isabela. In the report aired yesterday, ABS-CBN News said the Antonio Banderas look-alike has started training with the Azkals but he will not join the team in the match against Mongolia on March 15. "I wish them all the luck in the world, and I hope they win that match," his interpreter quoted him as saying.

Azkals Coach Hans Michael Weiss has praised Aldeguer’s versatility on the field. "While other players talk (about) what they can do, he does his talking on the playing pitch... Aldeguer is a versatile player who can play midfield or forward," he told Malaya.

If the Azkals win against Mongolia, Weiss told Malaya that the Malaga native is certain to be included among the 23-man roster he will submit for the Myanmar group stages.

Aldeguer does not speak English but Weiss told Malaya, "This won’t be a problem since the football language is universal... I will supply them with a dictionary that translates football terms in Spanish, German, Italian, English and Portuguese."

For more on this story, log on to ABS-CBN News and Malaya.

Azkals Football Angelaldeguer Anghelaldeguer
Your Guide to Thriving in This Strange New World
Staying
In? What to watch, what to eat, and where to shop from home
OR
Heading
Out? What you need to know to stay safe when heading out