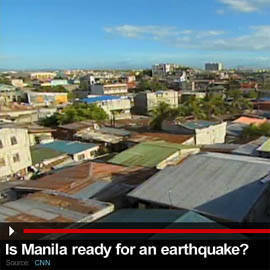 What would happen if a major earthquake hit Manila?

In the wake of the massive 8.9-earthquake that hit Japan last week, the lingering question now on every Filipino's mind seems to be, "are we next?" And if so, "what will happen to us?"

Since the 7.0-magnitude earthquake struck Haiti in January 2010, local geologists have been anticipating a major earthquake to hit Manila termed as the "Big One." CNN released a report last year that documented Manila's earthquake vulnerability citing the Marikina Valley fault as "ready to give in," according to Geologist Mahar Lagmay, an associate professor at the National Institute of Geological Sciences at the University of the Philippines. Lagmay said a 7.0-earthquake would be like a "1,000 Nagasaki atom bomb explosion underneath the Earth’s surface along the Marikina Valley Fault."

In an ABS-CBN News report last Friday, March 11, director Renato Solidum of the Philippine Institute of Volcanology and Seismology warned residents living near the Marikina fault line that buildings and houses could collapse when the ground starts to shake. Meanwhile, an Inquirer report published today, March 14, listed catastrophic scenarios cited by Pacific Strategies and Assessments should a high-magnitude earthquake hit Manila, which could include: an estimated 117,000 homes that would "either collapse or suffer damage, rendering 1.2 million homeless," damaged water reservoirs and purification plants that would immediately cut 4,000 water supply points, and "at least 30 kilometers of electric cables cut, removing the supply of power instantly across the metropolis," among others.

For more on this story, log onto CNN,  ABS-CBN News and Inquirer.net.

Earthquake Manilaearthquake Japanearthquake
Your Guide to Thriving in This Strange New World
Staying
In? What to watch, what to eat, and where to shop from home
OR
Heading
Out? What you need to know to stay safe when heading out