Another Racist Rant Gone Viral: UCLA Student's Anti-Asian Sentiments in the Time of Tsunami
Loading
Already a member? Log in
No account yet? Create Account
Spot.ph is your one-stop urban lifestyle guide to the best of Manila. 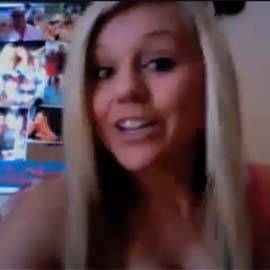 Nobody wants to be this girl right now.

Alexandra Wallace complains about the manners of Asian students

Another racist rant video has gone viral and it's not John Galliano's. Alexandra Wallace, a political science student at the University of California Los Angeles, is under fire for posting an anti-Asian racist rant on YouTube where she complains about the manners of Asian students.

"The problem is these hordes of Asian people that UCLA accepts into our school every single year, which is fine. But if you’re going to come to UCLA then use American manners," Wallace said.

In the three-minute video, Wallace mocks an Asian language and faults Asian students for talking on the phone in the library.

"I swear they’re going through their whole families just checking on everybody from the tsunami thing," she said.

After being condemned by members of the UCLA community and supposedly receiving multiple death threats via e-mail and phone, Wallace contacted university police early Sunday evening and was advised to reschedule her exams after her class schedules and exam loactions were posted online, UCLA newspaper The Daily Bruin reported.

"Clearly the original video posted by me was inappropriate. I cannot explain what possessed me to approach the subject as I did, and if I could undo it, I would. I’d like to offer my apology to the entire UCLA campus. For those who cannot find it within them to accept my apology, I understand."

UCLA Associate Vice Chancellor and Dean of Students Robert Naples said, "If she's received a death threat, I find that as deplorable as her original YouTube video. If this is the response of students on campus, we've got a lot of work to do."

According to UCLA newspaper The Daily Bruin, Wallace took the video down on Sunday. Still, it hasn’t stopped web vigilantes from re-posting, spoofing, even creating music video responses, to the now infamous video.

Alexandra Wallace Anti-asianracistrant
Your Guide to Thriving in This Strange New World
Staying
In? What to watch, what to eat, and where to shop from home
OR
Heading
Out? What you need to know to stay safe when heading out