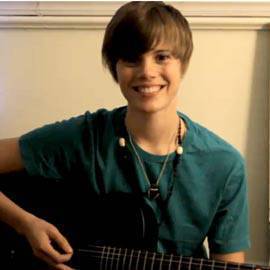 Meet the tween sensation’s 22-year-old female counterpart who also happens to sing just like him.

Dani Shay sings "What The Hell," a parody of Bieber’s hit song "Baby"

If you think the world needs more Justin Biebers then you just might have gotten your wish. Meet the 22-year-old singer-songwriter Dani Shay from Orlando, Florida, who bears an uncanny resemblance to the pop sensation-side-swept hair and all-and who also happens to sing just like Bieber.

"I am stopped everywhere I go because people think I am Justin Bieber," Shay says. "Before I even knew who he was, no matter what I was wearing, I would be asked for photos, autographs. "

In a YouTube video uploaded on December 31 by Shay, she sings a parody of Bieber’s hit song "Baby" titled "What The Hell," which she said expresses her initial confusion and shock when she first saw Bieber’s face. According to UK newspaper The Telegraph, Shay describes herself on Facebook as "’a lesbian who looks like Justin Bieber, but is uniquely different in her own ways." She added, ’’I’ve had my hair like this for years, and I’ve had my face like this all my life.’’

Today, Shay is a YouTube sensation herself-videos of her "Baby" parody and a cover of Eminem’s "Love The Way You Lie" have both gone viral with more than 1,000,000 hits on YouTube.

Justin Bieber Danishay Justinbieberlook-alike
Your Guide to Thriving in This Strange New World
Staying
In? What to watch, what to eat, and where to shop from home
OR
Heading
Out? What you need to know to stay safe when heading out