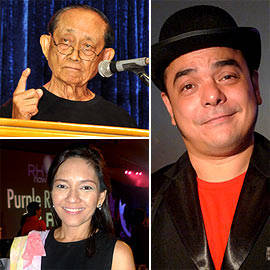 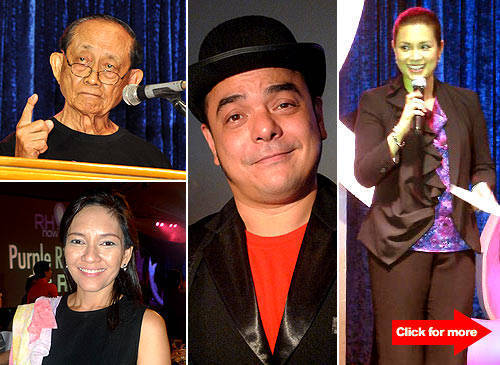 The fight for reproductive health rights in the Philippines had been ongoing for about two decades now. Many sectors, on their own and collaboratively, have worked to further the cause on the streets, in the legislation process, through information awareness campaigns, through community services and through other means of advocacy.

On May 11 at the Crowne Regency, advocates from the various sectors of society, leaders, artists, organization heads gathered for a significant event in their fight. It was the launch of the RH Purple Ribbon, the symbol that now serves as the symbol for fight for reproductive health rights in the country. Some 400 people were present for the reveal of this milestone.

At the event, notable personalities were given the floor to express their sentiments on the RH Bill. Former DOH Secretary Esperanza Cabral gave the opening remarks, at once referring sardonically referring to the Catholic Church's comment of adopting and caring for unwanted, unplanned children and their underprivileged families and sent a message for those "desperate at having too many mouths to feed to go to Caritas Manila or any church of the Catholic religion." This miracle, she said, would be welcome but "Until then, you and I will have to contend with 4,700 mothers dying every year of pregnancy and childbirth complications. And babies left behind who are likely to die too because their mothers are not there to take care of them. Until then, you and I, will just have to keep pushing for the right of women and couples to be informed accurately and non-judgmentally about choices in founding their families consistent with responsible parenthood, their cultural and religious beliefs; and the duty of the State to exercise their choices in case they do not have the means to do so themselves."

Adding fuel to the ignited fervor, former President Fidel Ramos took the chance to give context to the need for reproductive health measures and policies, citing the 1994 Cairo Commitment that dates to his term, which included in its objectives the reduction of maternal and infant mortality and the empowerment of women with the freedom and the means to achieve their desired family size, and of the UN's Millennium Development Goals, that lists maternal health as one of its goals in eliminating poverty in countries like the Philippines. His deft use of humor in presenting his facts took a sterner note when he issued an appeal to President Noynoy Aquino, saying "To do the right thing, Mr. President, you must certify the RH Bill as urgent." The cited the significance of the Purple Ribbon as the symbol to amplify the voices of women.

National Chairperson of the Democratic Socialist Women of the Philippines Beth Angsioco told SPOT.ph, "The purple ribbon for RH is part of the big push for the passage of the reproductive health bill-the bill that will help prevent women’s deaths from preventable and curable pregnancy and childbirth-related complications." RH is primarily a women’s issue and women’s voices should be heard in the discourse and purple ribbon symbolizes this." She added, "It symbolizes our commitment to save these women’s lives and the feeling is good when the fight of ordinary women also becomes the fight of big celebrities. "

Also present were authors of the RH Bill, Representatives Edcel Lagman and Luz Ilagan who acknowledged the support of fellow legislators for pushing the bill and for the participation of advocates who made sure that the bill's passage does not lose hope.

Performing that afternoon were Noel Cabangon, with an RH-flavored "Mabuting Pilipino" as well as rock acts Imago, who jammed with Cookie Chua, and The Dawn. Lea Salonga, a staunch RH advocate, performed John Lennon's "Imagine" before leading the crowd into a commitment pledge.

Photos by the Philippine Legislators Committee on Population and Development and femalenetwork.com

Purple Ribbon Rhbill Bethangsioco Leasalonga Fidelramos
Your Guide to Thriving in This Strange New World
Staying
In? What to watch, what to eat, and where to shop from home
OR
Heading
Out? What you need to know to stay safe when heading out