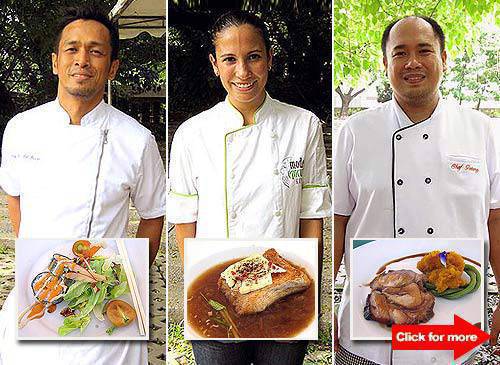 Oxfam International, a group of fifteen organizations dedicated to finding solutions to poverty and injustice, advocates practical changes in how we produce, consume, share and manage food and other resources through the Grow Campaign. "We’ve got to produce enough food. By 2050 there will be nine billion people on the planet and we’ve got to do this in an environmentally sustainable way," said Oxfam Hong Kong Director General John Sayer during the launch. "We’ve got to do it in a way where the food reaches the people who need it. There’s no point in producing food that is geographically far away or unaffordable."

The launch also highlighted the contribution of women farmers in the country as a vital part of the food production chain via a photo exhibit at the Bantayog ng Bayani. The chefs featured the ingredients grown by the women farmers in preparing the "good food" lunch served during the event. Stephanie Zubiri’s Filipino-Style Onion Soup used organic onions grown by Ligaya "Laling" Oria of Munoz, Nueva Ecija while Chef Sau del Rosario used alumahan from Naic, Cavite to make Spicy Alumahan Maki with srirachi, apple and walnut salad on roasted sesame dressing. "We always think that we can only use tuna or salmon for maki, but alumahan (mackerel) is actually a good substitute," said Chef Sau del Rosario, who is also behind the sustainable food menu at Le Bistro Vert in Makati.

Oxfam Philippines hopes to develop awareness for the need to invest in new agriculture, manage markets to prevent food crises, and reform flawed policies at the global and national level through the Grow Campaign.

Sustainable Food Sustainabledining Oxfamphilippines Stephaniezubiri Cheftatungsarthou Chefsaudelrosario
Your Guide to Thriving in This Strange New World
Staying
In? What to watch, what to eat, and where to shop from home
OR
Heading
Out? What you need to know to stay safe when heading out