(SPOT.ph) Photos of a couple who had their pre-nup shoot at the Libingan ng mga Bayani has circulated on the Internet, drawing criticism from the online community," reports ABS-CBN News. Online users described the gesture as "tasteless" and "disrespectful."

The couple, "Jun" and "April," explained that the concept supposedly evoked the idea of "till death do us part." Critics, including wedding photographer John Mateos Ong, said there was no logic behind the shoot. "Masyado siyang ironic. The place is for mourning pero kasiyahan ang nakikita mo doon (It's too ironic. The place is for mourning)," Ong said. The photographs also featured the couple doing "wacky" poses.

The studio responsible for the shoot has since taken the photos down. According to Antoni Magana of East Digital Studio, they overlooked the sanctity of the location. Jun also texted a message of apology to ABS-CBN News: "The pictorial was never intended in any way to offend or disrespect the buried soldiers and their families. If we have offended anyone from those images, I would like to express my deepest apology. In behalf of my wife, we are really sorry," he said. 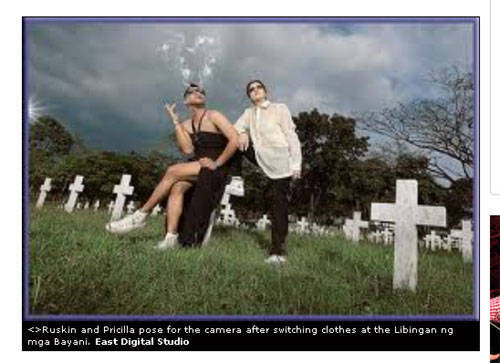 Libingan Ng Mga Bayani Pictorial Wedding Pre-nup Disrespect
Your Guide to Thriving in This Strange New World
Staying
In? What to watch, what to eat, and where to shop from home
OR
Heading
Out? What you need to know to stay safe when heading out