Sara Duterte's sucker punch, her Daddy gives the finger + more lowlights
Loading
Already a member? Log in
No account yet? Create Account
Spot.ph is your one-stop urban lifestyle guide to the best of Manila. 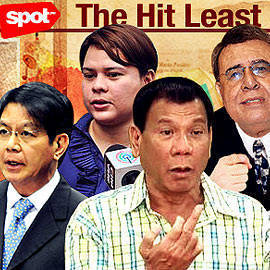 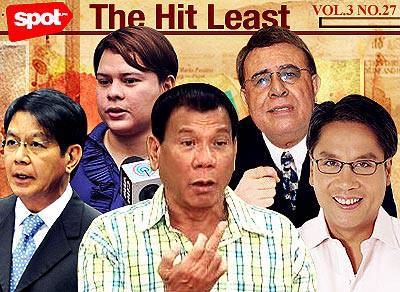 1. SOME BISHOPS AND PRIESTS ALLEGEDLY ASKED THE PCSO FOR VEHICLES. Using Jesus to get what you want is definitely better than getting a car loan.

2. ARCHBISHOP OSCAR CRUZ TALKS ABOUT THE PCSO SCANDAL. From the Bible of Attention Seekers: Man does not live with his opinions alone, he must also be on national TV telling everyone how he feels every chance he gets.

3. P-NOY SELLS HIS PORSCHE BECAUSE OF "SECURITY REASONS." This hurts him more than any of his break-ups.

4. IMELDA MARCOS CELEBRATES HER 82ND BIRTHDAY. The secret to a long life is to have lots of shoes...and no sense of reality.

7. DAVAO CITY MAYOR SARA DUTERTE SAYS SORRY FOR PUNCHING A COURT SHERIFF. Your sorry is good, but the sheriff’s shame has gone viral.

8. DAVAO CITY VICE MAYOR RODRIGO DUTERTE, FATHER OF THE EMBATTLED MAYOR, SHOWS HIS SUPPORT BY GIVING THE FINGER. Can you spell "Neanderthal?"

9. EX-PCSO CHAIRMAN MANOLING MORATO DEFENDS BISHOPS WHO ASKED FOR VEHICLES. Just one of the many new ways to secure a spot in heaven.

10. MAR ROXAS IS SWORN IN AS THE NEW DOTC CHIEF. Under his barong should be a t-shirt that says, "I gave up my bid for the presidency and all I get is a Cabinet post."

Sara Duterte Maricelsoriano
Your Guide to Thriving in This Strange New World
Staying
In? What to watch, what to eat, and where to shop from home
OR
Heading
Out? What you need to know to stay safe when heading out