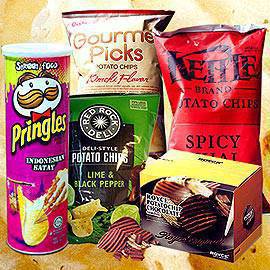 From the strange to the scrumptious, SPOT.ph samples the best "gourmet" potato chips available here. 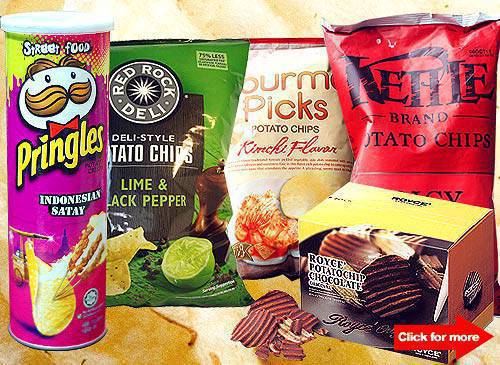 Street-food inspired, fruit-flavored, chocolate-coated. What other potato chip flavors made the cut? Click for more.

Penicillin, popsicles, and potato chips-they all have something in common, and we don't just mean the letter they start with. All three, like several other great inventions, began with an accident. In the case of the potato chip, the serendipitous circumstance began in 1853 when Chef George Krum of the high-end Moon Lake Lodge in Saratoga Springs, New York, felt insulted after a patron "criticized" his French fries for being too thick.

Aggravated and a shade oversmart, Krum decided to rouse the customer by slicing the potatoes into paper-thin pieces and frying them to a crisp. Flavoring his creation only with spite and irritation, Chef Krum served the platter of provocation to the offensive customer. But instead of being annoyed, the customer loved it. Seven years later, Krum opened his own restaurant featuring the now-iconic American snack, and the rest, as they say, is history.

Potato chip flavors likewise grew-salt, cheese, barbecue, and sour cream were added to the ever-growing list. Soon, unconventional flavors popped up, and it seems lately these crunchy snacks are making its way back to their "gourmet" origins. From fruit-inspired to culturally inclined, this new breed of potato chips may be unusual (and sometimes weird) but they do add some "haute-ness" to the otherwise ordinary snack. After rifling through the country’s favorite chicheria, this time SPOT.ph goes gourmet-junk-food style.

Note: Potato chips sampled for this list are those available in most supermarkets and concession stands.

Unconventionalpotatochipflavors Fritolay Gourmetpotatochips Must Try Potato Chips
Your Guide to Thriving in This Strange New World
Staying
In? What to watch, what to eat, and where to shop from home
OR
Heading
Out? What you need to know to stay safe when heading out