"Discomforting" photos of 10-year-old Vogue model spark debate on sexualization of young girls
Loading
Already a member? Log in
No account yet? Create Account
Spot.ph is your one-stop urban lifestyle guide to the best of Manila.

(SPOT.ph) Photos of 10-year-old model Thylane Loubry Blondeau on French Vogue have sparked debates on youth extortion and sexualization of young girls, reports Time. Though she posed with other young girls, Blondeau stood out for looking more mature and "discomforting," reports The Huffington Post.

Time described Blondeau's fashion editorial as having a: preternaturally mature stare and a Brigitte Bardot pout that is both stunning and unsettling. And of course there’s something disturbing about the whole concept of using a 4th grader to hawk couture for adult women." According to The Huffington Post, the Vogue spread was not Blondeau's first foray into modeling. The daughter of football player Patrick Blondeau and actress/fashion designer Veronika Loubry also shot several editorials for Vogue Enfants, and even walked in Jean Paul Gaultier's Spring 2006 runway show.

The photos ignited outrage, especially from parents. In an interview with the Daily Mail, Fleur Dorrell of the Mother's Union described the images as "physically disturbing" and "blurring all thoughts of beauty." Parliament member Helen Goodman also accused Vogue of being "disgraceful and totally irresponsible," adding that the magazine has "descended into the gutter by doing this."

Blondeau has followed in the footsteps of actresses Elle Fanning, 13, (Marc Jacobs) and Hailee Steinfeld,14, (Miu Miu) in modeling clothes made for adult women. 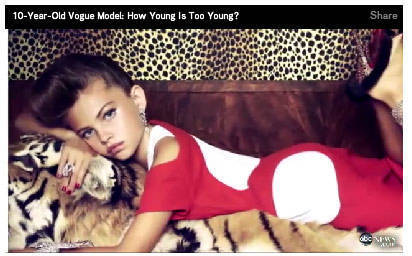 Click on photo to watch ABC’s analysis on pre-pubescent models.

Thylane Loubry Blondeau Voguefrance Sexualizationofyounggirls Youngmodels
Your Guide to Thriving in This Strange New World
Staying
In? What to watch, what to eat, and where to shop from home
OR
Heading
Out? What you need to know to stay safe when heading out