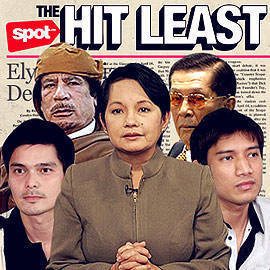 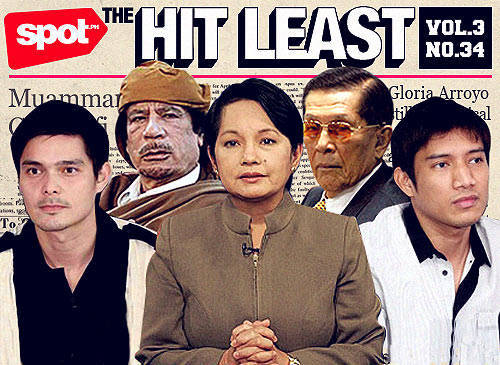 1. SECRETARY RICKY CARANDANG GETS VERBALLY "WHIPPED" BY REP. MITOS MAGSAYSAY ABOUT HIS STAFF’S APPLE LAPTOPS . This reminds us of a National Geographic clip, the one where a lion takes down an unsuspecting gazelle and eats half of its face before the poor creature even realizes what the heck is going on.

2. BUREAU OF CUSTOMS HEAD ANGELITO ALVAREZ SAYS HE WON’T RESIGN DESPITE LOUD BUZZ ABOUT HIS REPLACEMENT, SAYS HE’LL WAIT FOR PNOY TO TELL HIM TO GO. Gosh, PNoy might as well break up with this guy via SMS.

4. SENATOR PANFILO LACSON SLAMS ARROYOS’ BOOKKEEPER. Well, at least she has balls enough not to go into hiding.

5. OGIE ALCASID AND REGINE VELASQUEZ SHOW OFF THEIR BABY BOY’S IN-UTERO PHOTO DURING OGIE’S CONCERT. At this rate, the kid will be writing his memoirs before he’s even toilet-trained.

6. SEN. JUAN PONCE ENRILE SUGGESTS BUREAU OF CUSTOMS USE GPS TO FIGHT SMUGGLING. Looks like somebody misses playing Big Brother (the sinister one as envisioned by George Orwell and not the one who has housemates doing silly tasks).

7. REP. GLORIA MACAPAGAL-ARROYO STILL IN A "DELICATE" STATE AFTER THIRD CERVICAL SPINE SURGERY. So, does anyone remember how many more lives she has left?

8. DINGDONG DANTES TALKS ABOUT HOW LUCKY HE IS. Three words: Slow news day. (And we needed a filler right here.)

9. JAMES YAP DISCUSSES HIS LOVE LIFE. Whoever you’re dating, Bimby will hunt her down.

Hitleast Rickycarandang Ogiealcasid Reginevelasquez
Your Guide to Thriving in This Strange New World
Staying
In? What to watch, what to eat, and where to shop from home
OR
Heading
Out? What you need to know to stay safe when heading out