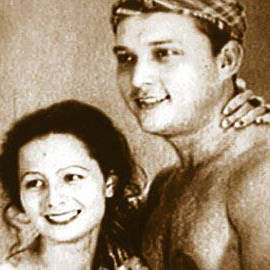 The 1930s silent B-movie was long believed to have been directed and produced by an American named John Nelson, said to be none other than Jose Nepomuceno, a great pillar of Philippine cinema. 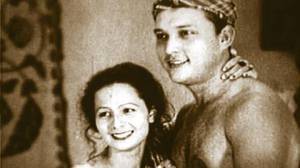 This is the fifth year of the International Silent Film Festival and for the first time a Filipino film opened the festival, which runs this weekend at the Shangri-La Cineplex. There are apparently less than 20 silent film festivals all over the world. This one is especially unique because it programs not only silent classics from Italy, Germany, and Japan, but also features the best Filipino musicians to perform a live score during the screening. I promise you, it is awesome. I cannot think of a better way to spend a long, wet weekend than to sit in the dark and listen to live music and watch a silent film.

The terrifically obsessed film archivists who make up SOFIA (the Society of Filipino Film Archivists)-specifically Teddy Co and Dr. Marty Magsanoc-discovered Brides of Sulu, a silent film from the 1930s, a B-movie long believed to be an American production. Teddy Co asserts that the credited director/producer John Nelson was none other than Jose Nepomuceno, a great pillar of Philippine cinema. The stars Adelina Moreno and Eduardo de Castro were favorite actors of Jose Nepomuceno-and both certainly looked white enough to cross over to the West. Eduardo de Castro was an American mestizo, while Adelina Montero from Iriga was called the Greta Garbo of the Philippines.  Teddy Co's pre-screening lecture presents a strong case that Brides of Sulu is actually made up of two earlier films by Nepomuceno, Princess Tarhata and Moro Pirates.

In Brides, a Muslim Princess (Montero) is in love with a Non-Believer (de Castro), and decides to run away with him. The forty-seven minute film basically weaves dramatic sequences from Tarhata-meeting in secret, escaping the datu, killing the snake-with more documentary type shots from Pirates of everyday life in Moroland. Brides of Sulu actually does look like two films re-edited into a longer one, most likely put together to supply the American market hungry for stories about the savage, exotic, and faraway Philippines.

An excerpt from Brides of Sulu

Set to a score of traditional instruments and funkier stuff (like a harmonica) by Armor Rapista, Brides of Sulu comes alive again-possibly it's best reincarnation because of the live music. When the Muslim Princess and Non-Believer elope, there's a scene where the lovers reach the shore, escape is imminent. But a boy spying from a coconut tree sees them, so he shimmies down the tree and runs to the village. He rings the gong and soon the villagers arrive. They run to the shore and bring out the boats-there are amazing shots of dozens of vintas on the water with the clamor of gongs in the background. It makes a beautiful chase scene: the lovers in their small boat, paddling desperately to the other side and a vinta fleet in full blown sail mode chasing after them.

Aside from my favorite water shots, there is a lot of gorgeous cinematography in Brides. The way the young girls coil their shiny black hair into neat and elegant buns, held back with copper combs. The graceful way the women wear the woven fabrics around their bodies. The delicate build of the men and the fierce expression on their faces. The sparring carabao, the dancing with fans, the gongs, chimes, and drums-somehow it just all came together. Happy ending, of course.

The 5th International Silent Film Festival runs this weekend at the Cineplex of Shangri-La Mall. They release tickets an hour before each screening so be there early! Tickets are free. See the schedule here.

Silent Film Fest Bridesofsulu
Your Guide to Thriving in This Strange New World
Staying
In? What to watch, what to eat, and where to shop from home
OR
Heading
Out? What you need to know to stay safe when heading out